Contain yourself – StorageOS is coming

DockerCon StorageOS is a UK-based startup offering simple and automated block storage to stateless containers, giving them state and the means to run databases and other applications that need enterprise-class storage functionality without the concomitant complexity, rigidity and cost.

It runs as a container in a Linux system and provides plug-ins for other containers to use that give them easy, programmatic access to stateful storage services.

The company was founded by CEO Chris Brandon, CTO Alex Chircop, product management VP Simon Croome, and engineering VP James Spurin. It is Brandon's fifth startup, others he has worked with being GreenBytes and Xsigo – both bought by Oracle – where he led the technical teams.

Croome led global engineering teams at Fidelity and Nomura, and web development at UBS in London. Spurin was previously the block storage product manager for Goldman Sachs and the technical lead for storage engineering at Nomura. We see lots of experience in enterprise IT and storage here.

These four got together and after a year's discussion of product technology needs, architecture and design, set up StorageOS in 2015, with private investor support.

What they want to provide is an enterprise-class storage platform that is simpler, faster, easier, and lower-cost to use than legacy IT storage, which they characterise as needing storage admins, slow, complex, costly and rigid. They want to provide automated storage provisioning to containers which can be instantiated and torn down many thousands of times a day.

Brandon says the company is deliberately not located in Silicon Valley, which venture capitalists expect, because Silicon Valley has an insular environment. There is lots of innovation in London, England, where several other container-focussed startups exist.

The founder's thesis is that manually provided and managed storage is obviously not practical for containerised and DevOps-type environments. So, Brandon said, "We built a toolset for people to store data in containers."

It is agnostic about the underlying platform: bare metal, containerised, virtualised server or the cloud. The company says StorageOS, the product, "is an ultra-low entry point, full enterprise functionality storage array that is integrated with VMware, Docker, AWS, and Google Cloud."

StorageOS is focussed on containers for now because that is where the largest initial opportunity is located. It has four focus areas in the container arena: 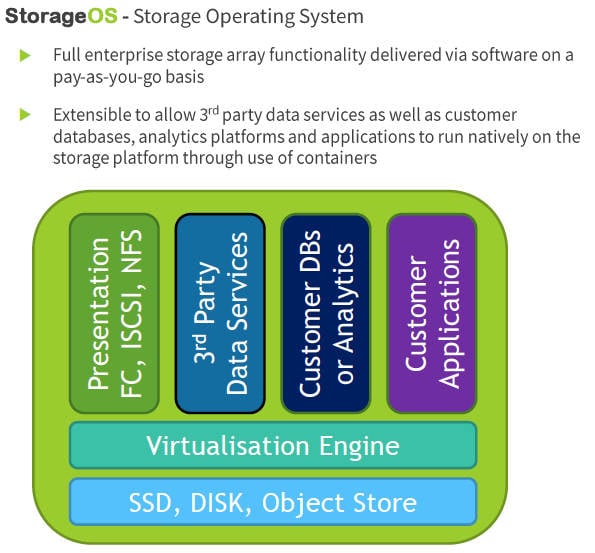 The product works like this: it installs as a container under Linux or a containerised OS such as CoreOS. It locates the storage accessible by its host node: direct-attached, network-attached and cloud-attached, and connected nodes. This is aggregated into a virtual, multi-node pool of block storage. Volumes are then carved out for accessing containers, (thinly) provisioned, mounted, and a database can be loaded and started. This is done in single-digit seconds, typically 2 or 3.

Accessing containers use a StorageOS plug-in from Docker or Kubernetes to "see" the StorageOS container, and have their storage provisioning automated, accelerated and simplified.

The back-end storage itself is not accessed unless data needs to be read or written.

On top of this basic provisioning there are bells and whistles adding enterprise storage-class functionality:

Brandon says: "There is a lot of power in the rules engine – far beyond what a traditional storage array would provide."

StorageOS encourages performance by running storage for databases that runs on the same node as the app and provides local caching.

The QoS comes in two forms. Basic QoS is about not exceeding thresholds for IOPS and throughput while enterprise QoS is more sophisticated, using a fair use scheduler to balance out QoS across different services and remedy the noisy neighbour problem. With the QoS features, Brandon says, admins don't have to hand-tweak containers.

This set of features is variably distributed across a free edition of the software and two paid-for editions:

Volume-based pricing will also be available.

StorageOS is not limited to use by containers – it being a general and software-defined storage provisioning platform for virtualised servers and the cloud. It will have iSCSI and Fibre Channel support added, being a general software-defined storage product if customers want to treat it that way. The beta product is being released now and here is what it broadly looks like: 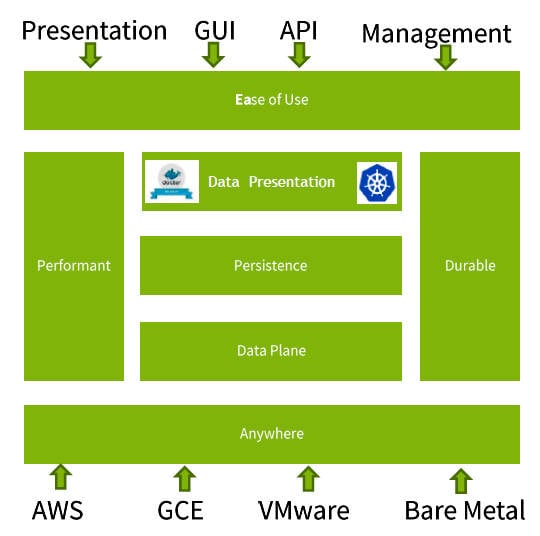 Support for free software version customers will involve a forum and email, while paid-for customers can buy next-day and 24x7 4-hour support services.

StorageOS has joined the Linux Foundation and is a board member of the Cloud Native Computing Foundation (CNCF), where it is involved in setting up a Storage SIG and has a Kubernetes plug-in. It has also been accepted as a Docker Alliance Partner.

A future release will add iSCSI and Fibre Channel support.

Chircop thinks: "The container market is on the verge of being enterprise-ready," there being a vast ecosystem of developers and products pumping huge momentum into the area. OpenStack supports containers. So too does VMware, with Photon. NetApp has a container plug-in and its SolidFire unit is involved with DockerCon, as will IBM.

In the fast-moving container compute environment, traditional storage is too slow, too awkward, too complex and over-expensive. It has to have lower cost and automated provisioning yet, for enterprise container use, it must also have enterprise-class data services. That balance of features is what StorageOS intends to provide.

StorageOS is available now – www.storageos.com/download. The Professional Version costs less than $30/month. The beta test is this month and full product GA is scheduled for the Autumn. Check out the product at DockerCon in Seattle, June 19-21, stand number E12. ®