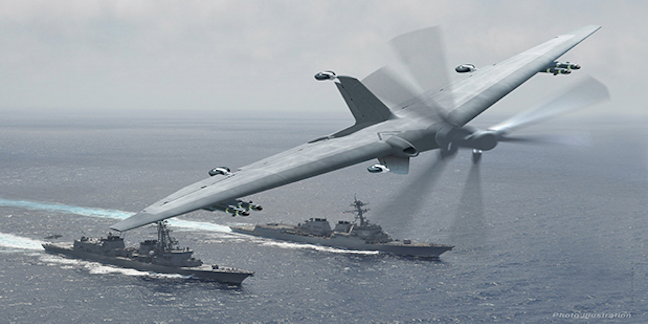 Apparently, DARPA likes what it sees in its TERN project. Earlier this month, it gave contractor Northrop Grumman just under US$18 million to build the second of its Tactically Exploited Reconnaissance Node aircraft.

Part of the significance of this is that the contract notice that went out on June 17 was the first hint the world had that there had been a first TERN.

What DARPA wants out of the project is an unmanned drone that can launch from a ship, deliver weapons, and return, using the kind of space devoted to helicopters rather than needing an aircraft carrier.

The concept photo that the agency published last December, when it first went to market, may or may not show what it's buying from Northrop Grumman. The counter-rotating props would let it take off and land vertically before taking a horizontal attitude for flight.

The first deployments of TERN would be for reconnaissance, but eventually DARPA wants the craft to be able to carry 600 pounds' worth of ordnance.

The new contract under the program is to build a second vehicle under the Tern Demonstration System (TDS).

DARPA's original market approach says the ideas behind TERN aren't new. It cites a 1950s project, the Convair XFY-1 Pogo, as an example.

The current phase of the TERN project is to bring the designs up to a full-scale demonstrator craft. ®