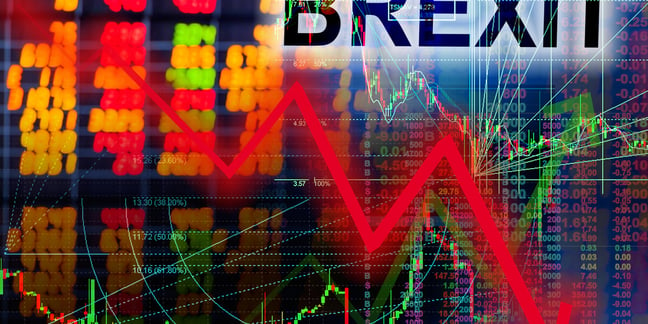 Yet another analyst has delivering a damning forecast for tech spending following last week’s UK referendum decision to leave the European Union as major suppliers prepare staff for what could months of slowing sales.

Channel-watcher Canalys projected local sales spending of $90bn to $100bn for the year before Brits voted to leave the EU, but warned the decision has “shorter- and longer-term implications”.

First up, it has re-modelled predictions and “expects this to fall by up to 10 per cent in 2016, based on public sector and businesses cutting expenditure to reduce risk,” said principal analyst Matthew Ball.

“The outlook for 2017 could be even worse, with up to a 15 per cent decline as IT budgets are set lower on the prediction of a tough year ahead and ongoing uncertainty,” he added.

American vendors with overseas operations have already wrestled with the appreciating dollar versus the euro and sterling last year and this. The Brexit vote caused the British pound to crash to a 31-year low.

Suppliers told us on Friday the currency crash has caused some vendors to suspend orders as they ascertained the impact on their price list.

Ball at Canalys warned if the rate falls to $1.20 to the £1, tech prices will rise, as Gartner predicted last week.

“In the short term, contracts will have to be renegotiated and proposals requited due to the strong shift in value. Any new activity will be suspended until rates stabilise."

Financial markets, which have melted since the EU referendum, are likely to remain “volatile” for the next six months, and Blighty is in danger of moving into a recession as businesses and consumer keep their wallets shut while they assess the lay of the land.

Tech suppliers are digesting the impact of Brexit - the majority of big businesses wanted to remain in the Union. Most vendors didn’t have a response when the outcome of the vote was confirmed but have obviously written to staff.

In a memo to Hewlett Packard Enterprise staff in the UK and Ireland - seen by us - Andy Isherwood, MD, said it was witnessing an “immediate economic impact as the market reacts to the news”.

“This volatility is no surprise, but we hope it will be short term. The UK economy remains strong, as does our HPE business.”

He added that over the coming months, “as and when we get a better understanding of the government’s plan and our timeline for exiting the EU, please be assured that we have a team in place to build a plan for our business”.

The negotiations will start once the UK has another prime minister and could take at least two years. “In the meantime, it is vital that we focus on the continued growth of our business,” said Isherwood.

Over at SCC - which is among the UK’s largest services-based resellers - owner Sir Peter Rigby told his charges the company must “deal” with an outcome that was not desired by management.

“Through the inevitable turbulence and disruption of the coming weeks and maybe months, the group is well positioned to weather the storm. We are a diverse, profitable and well-managed organisation with low debt and a very strong balance sheet. We have a tremendously competent and committed workforce.”

The knighted biz overlord - who also owns hotels and airports under the Rigby Group - said many of his competitors “do not have such advantages and will experience difficulties in the tough business climate that lies ahead where they might, for example, suffer from high levels of debt and poor profitability”.

He said the group had endured “turbulent macro-economic events in its 41-year history” and the decision to leave the EU was “one of those major events… it will be the same this time”.

Brexit could also be opportunity for tech suppliers as vendors look to push more business via third party suppliers to lower their own fixed costs. ®