Micron made a loss of $215m in its latest quarter, job losses are coming, and the Seagate eSSD partnership hasn’t taken off.

Micron CEO Mark Durcan’s canned statement reads: "Although we have made good progress in deploying our advanced DRAM and NAND technologies, we continue to face challenging market conditions. To address the current market environment and strengthen our competitive position, we are implementing a number of initiatives to reduce costs, drive greater efficiencies, and increase focus on our strategic priorities."

A global workforce reduction is coming and thus, with other initiatives, is supposed to save the company $300m+ in its fiscal 2017. 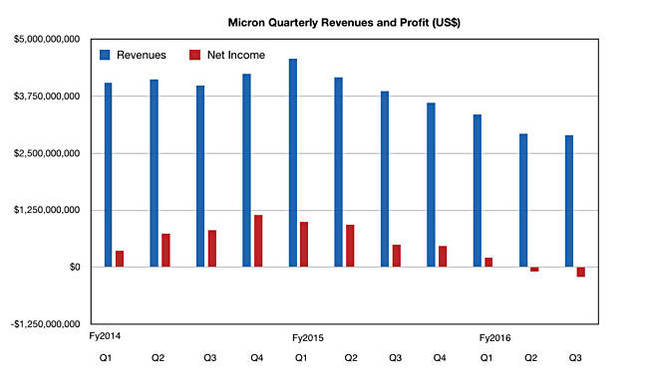 Stifel MD Aaron Rakers says Micron’s reported NAND revenue was ~$900m, or 31 per cent of revenue; it was 37 per cent in the prior quarter, suggesting a 17 to 27 per cent annual decline. He points out SanDisk’s revenue had increased by 2.5 per cent year-on-year in the March quarter.