Microsoft: Enterprise Advantage will be 'a step in quite a long journey to modernize our licensing'

Recognizing it has to do something about its tortuous licensing deals, Microsoft has come up with a new program: Enterprise Advantage.

Enterprise Advantage – not be confused with an Enterprise Agreement – will be available from early 2017 to companies with a Microsoft Products and Services Agreement (MPSA). It's aimed at outfits with 250 to 2,400 users or devices, is a three-year package, and lets you buy things organization-wide from Redmond.

Enterprise Advantage tries to offer everything that's in an Enterprise Agreement with extra stuff thrown in, such as the ability to mix together committed and transactional purchases on one contract, and order items whenever you need them at any time.

"It's a step in quite a long journey to modernize our licensing," Mark Nowlan, Microsoft's director of licensing marketing, told The Channel.

As we understand it, the situation in six months will be this:

Below is an illustration of how it will all fit together, at least initially, based on what Microsoft has told us – don't forget, the new Enterprise Advantage sits on top of the MPSA: 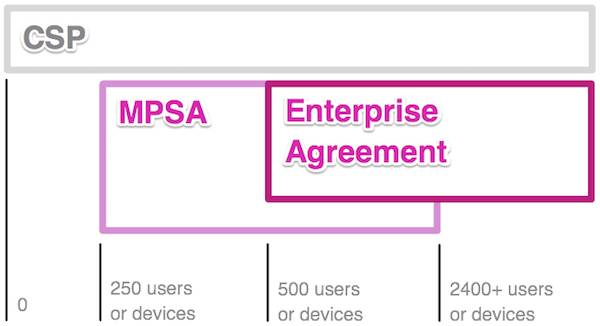 Also as previously reported, rest in peace Select Plus: that's now retired for commercial customers and MPSA is offered as an alternative. We're told that you will not be allowed to make new purchases using Select Plus agreements with anniversaries that are after July 1. If you're still on Select Plus, you'll be shifted over to MPSA.

This gradual replacement of complicated Enterprise Agreements with Enterprise Advantage on top of MPSAs is supposed to help untangle Microsoft's web of rules and red-tape, and make it easier for people to buy Redmond's stuff without having to make a ritual sacrifice to the gods of bureaucracy.

Crucially, perhaps, the changes make it easier for Microsoft to sell things.

"Reducing the licensing complexity for customers makes it a lot less complex for us, too," said Nowlan.

"Our software licensing has been based on traditional software, not on cloud services. As we wanted to serve more customers and build more programs, we had to adapt our license agreements for the cloud and the number of options grew too much for anyone to manage well.

"It’s a lot of overhead for customers and Microsoft. It makes much more sense for our customers if we have one unified licensing that lets them buy what they want, with one agreement and a 360-degree view of what they’re buying from us."

Business travel, outside training, and picnic overheads all under watchful gaze of Redmond's accountants
Software10 Aug 2022 | 25