And everyone is now happy to leave it be… wait, what's that? 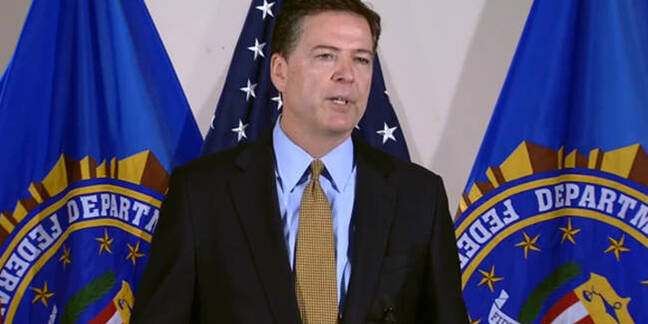 The FBI has said it will not recommend nor push for any charges against Hillary Clinton for her use of a private email server while secretary of state.

At a press conference Tuesday morning, FBI director James Comey gave a lengthy description of the investigation his staff had carried out, focused on whether Clinton has mishandled classified information, and concluded that "no reasonable prosecutor" would bring a case based on the evidence.

That wording is particularly relevant given the partisan nature of the issue. Clinton is the presumptive Democratic nominee for president and Republicans have long hoped that her use of a private email server for official US government business would provide them with enough evidence to undermine her candidacy.

Although Comey cut off the possibility of criminal prosecution, he did however make some striking criticisms of Clinton and her team. They were "extremely careless in their handling of very sensitive, highly classified information," he noted. And there were seven occasions where top-secret discussions took place over the system and Clinton "should have known that an unclassified system was no place for that conversation," he said. The FBI also found information classified "secret" on the system.

Overall the Feds concluded that despite not having full-time security staff for the server and despite a "security culture" at the State Department that was "generally lacking in the kind of care for classified information found elsewhere in the government," there was no "clear evidence" that Clinton or anyone on her team has "intended to violate laws governing the handling of classified information."

In other words, sloppy but not illegal.

The decision not to proceed with a criminal prosecution does not come as a big surprise. Unless there was evidence that Clinton or her team had knowingly bypassed reasonable security procedures - an unlikely scenario at best - the FBI was not going to recommend criminal prosecution of a former high-level official, particularly one who is a presidential candidate, during election season.

Republicans already knew the likely outcome, so moved their attacks to the idea that foreign governments may have accessed the system, in an effort to paint Clinton as a liability to the country.

Comey also covered that aspect of the case, noting "we did not find direct evidence that Secretary Clinton's personal email domain, in its various configurations since 2009, was successfully hacked." But, he said, they wouldn't expect to find any such evidence if the system had been hacked by sophisticated state-sponsored hackers.

The FBI did find that some of Clinton's contacts had been hacked however. And that Clinton's private email was an open secret: "known by a large number of people and readily apparent." Did Russia or China gain access to Clinton's email? Comey says it's "possible."

Comey was acutely aware that the FBI's investigation had a very political tint to it and so went out of his way to repeatedly stress the department's neutrality.

"I am going to include more detail about our process than I ordinarily would, because I think the American people deserve those details in a case of intense public interest," he began his presentation, immediately noting that he had not "coordinated or reviewed this statement in any way with the Department of Justice or any other part of the government. They do not know what I am about to say."

In closing, he again referenced the furor over the server. "I know there will be intense public debate in the wake of this recommendation, as there was throughout this investigation. What I can assure the American people is that this investigation was done competently, honestly, and independently. No outside influence of any kind was brought to bear."

And again, in case people didn't get the message: "We did the investigation the right way. Only facts matter, and the FBI found them here in an entirely apolitical and professional way."

But, of course, that is not the end of the matter. Comey noted that the FBI's role is only to recommend a course of action to the Department of Justice. And the focus of attention has shifted to a meeting between former president Bill Clinton (Hillary's husband) and attorney general Loretta Lynch the previous week.

Lynch and Clinton both happened to be in Phoenix at the same time, according to their claims, and met on Lynch's plane. They discussed nothing but golf and grandkids, Lynch said.

But of course no one, not even Democrats, believe it was a chance meeting, and with a possible presidency at stake, no one believes either that the issue of the email server investigation was not discussed, however tangentially by expert diplomats.

And so, the saga continues.

Not only do critics of Clinton have her husband's meeting with Lynch to work on but there is also a reference to "several thousand work emails" that were on Clinton's server but were deleted and not in the stash of 30,000 provided to the State Department.

Comey says they were able to recover most of them from a "laborious review of the millions of email fragments dumped into the slack space of the server." The result? Three classified emails.

The FBI bossman said that there was no evidence that there were intentionally hidden but were simply deleted in periodic clean-ups of the servers. But that is unlikely to quieten the conspiracy theorists.

Regardless, the decision not to file charges against Clinton for her use of the private server undermines a legitimate attack on her integrity, forcing it in the realms of innuendo and conspiracy – a similar end result to the Republicans' determined effort to find Clinton culpable of the attack on the US embassy in Benghazi.

Neither situation is going away, however, as indicated by Donald Trump's recent attempt to reanimate of the Clintons' long-dead Whitewater real-estate "scandal" from the early 1990s. Anything that can damage a reputation is fair game in Washington.

The hope by some that Clinton's use of a private email server would somehow provide a silver bullet to kill her candidacy has however died. And no politicians are likely to make the same mistake in future. ®