To wit: Pics of a burping supermassive black hole

Hitomi, the failed X-ray observatory sent up to space by Japan's Aerospace Exploration Agency, peered deep into the heart of a galaxy to reveal hot bubbling plasma before it died.

The satellite was launched in February with the aim of exploring high-energy activities in space, but lost contact with Earth a month later. Errors caused Hitomi to spin wildly and its solar-panelled paddles snapped off, making restoration impossible.

But it’s not all bad news. A team of scientists has discovered Hitomi did gather some useful information before it disintegrated; results have been published in Nature.

Hitomi spent its short life collecting X-ray data from the core of the Perseus cluster. A very bright active galaxy, known as NGC 1275, lies at the centre of the galaxy cluster, and is home to a huge black hole that scientists believe is as heavy as 340 million Suns. Its event horizon is as big as the Solar System.

The X-ray spectrometer aboard the satellite found that the hot gas in the cluster contained more matter than the matter locked up in its stars. The gas is heated to tens of millions of degrees Celsius and bubbled up from the central supermassive black hole like a cauldron. 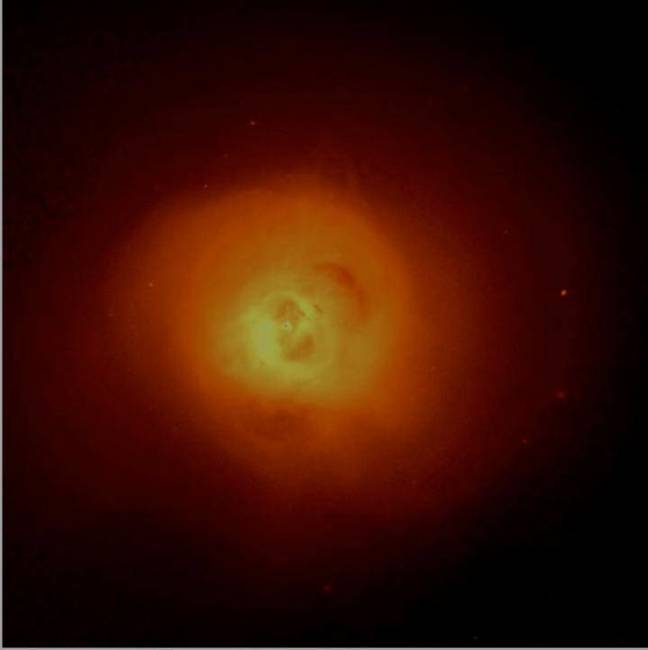 The turbulent motions of the gas were detected by the Doppler shift of the emission lines from the molecules of the gas.

“The hot gas is fuel for future generations of stars. Stars are the primary constituents in galaxies; they give life to planets. But the black hole is preventing the gas from cooling down to form stars,” Professor Brian McNamara, part of the research team and the University Research Chair in Astrophysics at the University of Waterloo, told The Register.

In a process known as feedback, matter falls into the centre of black holes and generates a huge amount of energy to heat the surrounding gas into a bubbling plasma.

Another team headed by Maxim Markevitch, a researcher at NASA, has probed the data gathered by Hitomi to study the properties of dark matter in the Perseus cluster ®