First planet spotted by SPHERE is a weird one

A newly discovered planet is wedged in-between three stars and experiences triple sunrises and sunsets every day, according to new research published in Science.

The planet, HD 131399Ab, is 340 light years away from Earth and can be found in Centaurus constellation – one of the largest constellations in the sky.

"HD 131399Ab is one of the few exoplanets that have been directly imaged, and it's the first one in such an interesting dynamical configuration," said Daniel Apai, an assistant professor of astronomy and planetary sciences at the University of Arizona, who leads a research group dedicated to finding and observing exoplanets.

It is the first time that an exoplanet has been spotted using the Spectro-Polarimetric High-contrast Exoplanet REsearch Instrument (SPHERE) in Chile. SPHERE operates at optical and near-infrared wavelengths and scientists found HD 131399Ab from the heat given off in infrared rays.

The new planet has a wide orbit, at 80 times the distance between the Sun and the Earth. At 16 million years old, the planet is a mere child compared to Earth – which is roughly 4.5 billion years old – and weighs in at around four Jupiter masses.

Scientists believe that their observations and computer simulations show that the multi-star system is dominated by one star that is 80 per cent more massive than the Sun. Two smaller stars orbit the larger star at three hundred times the distance of the Earth and Sun, and take 3,500 years to make one full revolution. These two stars are gravitationally locked in together, swivelling around one another in a never-ending chase. 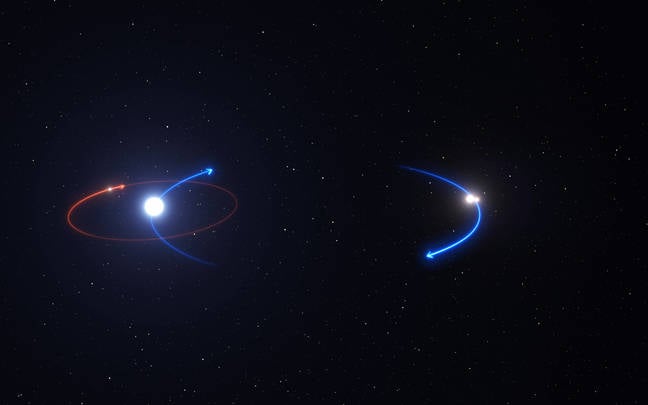 The authors believe that other orbital scenarios are possible, but depend on if they can be gravitationally stable. Apai said that the computer simulations showed that the system they modelled was stable, but little changes meant it "could become unstable very quickly."

"For much of the planet's year, the stars appear close together, giving it a familiar night-side and day-side with a unique triple-sunset and sunrise each day,' said Kevin Wagner, lead author of the paper and PhD student in Apai's research group.

As the planet travels around its main star, the stars grow further apart. Eventually, the stars reach a point where the setting of one coincides with the rising of the other, and the planet is in near-constant daytime for about one-quarter of its orbit, or roughly 140 Earth-years, said Wagner.

"We hope to learn more about how this planet formed and arrived at its present perplexing orbit, which could teach us something broader about how planet formation and migration occurs," Wagner told The Register ®.

Good luck pitching a tent on exoplanet WASP-76b, the bloody raindrops here are made out of molten iron

Raining irooooon, from a lacerated sky

Kepler 107c is way too beefy for its own good