Barracuda picks teeth after chowing down on cloud market

Selling services in the cloud sea is paying off

Gross billings were $98.2m, compared with $94.3m a year ago. Active subscribers grew approximately 14 per cent to pass 286,000, and the dollar-based renewal rate was 93 per cent for the quarter.

President and CEO BJ Jenkins was upbeat: “We delivered strong results in the quarter and exceeded guidance on revenue, billings and earnings per share. We grew revenue 11 per cent year-over-year and more than doubled our non-GAAP earnings when compared with the first quarter of last year”.

It’s almost a home run, with last year’s $3.8m loss turned into a $2.8m profit. With profits being 3.2 per cent of revenue there’s probably scope for increasing them. Hopefully it can make a profit in the full fiscal 2017 year as well, something that’s eluded it since its fiscal 2012. 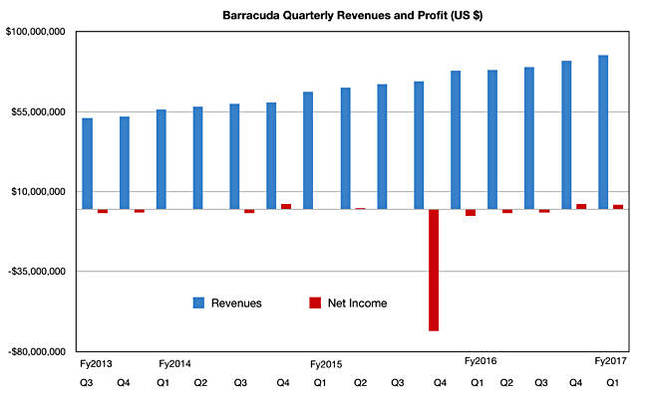 CFO David Faugno will leave on August 1, after 10 years in the role, with chief accounting officer and worldwide controller Dustin Driggs replacing him. There's nothing untoward here and Faugno will be an advisor during the transition.

BTIG Analyst Joel Fishbein said: "The beat was driven by strong performance in the subscription revenue line, which grew +20 per cent y/y (ahead of the Street’s +16 per cent y/y)."

William Blair analyst Jason Ader said it was another solid quarter that came in above guidance and the consensus of Wall St estimates. He thinks this is “a clear sign of stabilisation in the business and that the company now has a better handle on its business and forecasting ability.”

The beefed-up performance was “mainly driven by improved execution and new product traction and provides solid evidence that the company’s repositioning toward embracing public cloud adoption and MSP trends is starting to bear fruit.”

Ader notes that “a significant portion of the legacy on-premise business will continue to face headwinds as the transition to Office 365 and public cloud providers accelerates.” But “the legacy business grew one per cent year-over-year during the quarter, suggesting that the transition is not affecting the business significantly today.”

Fishbein is optimistic about Barracuda's cloud business, saying AWS and Azure "relationships are unlocking incremental opportunities up-market, as Barracuda leverages Azure and AWS to penetrate the Fortune 1000. We believe the secular migration towards public/hybrid cloud environments will be a key driver of core billings growth longer-term."

Barracuda is now swimming in the cloud sea. Instead of selling appliances direct to its end user SMB customers, it’s now selling cloud-delivered services to them, which they're staring to lap up. ®