It's the cloud, with go faster stripes

Notoriously secretive F1 team McLaren-Honda is set to race into the cloud with a worldwide tech partnership with Japanese teclo NTT Communications.

Speaking to journalists at McLaren’s Woking HQ team, McLaren Technology Group chairman and CEO Ron Dennis said data and analytics played a key role in the McLaren operation. The team’s current F1 car has 300 sensors spewing out data that has to be shipped from the car to the trackside staff, as well as to Mclaren’s home base in Woking and to partner Honda.

“We are simulating something like 300,000 races per second during the course of the Grand Prix and that data provides us with the ability to optimise the strategy and optimise the configuration of the car,” he said.

Dennis, and McLaren as a whole, boast that an update to the car is delivered every 20 minutes throughout the year - a time lag that is shrinking - but that every update is simulated first, further boosting the data and comms demands.

Citing the example of this weekend’s British Grand Prix, Dennis said, the trackside team were supported by the “Mission Control Centre” in Working, along with an even bigger team at Honda. “We have to have people in the right place. If we were not blessed with the right communications, people would have to be huddled in Silverstone….but they’re not, they are connected in real time.”

Under the deal, NTT Comms will “provide” network, cloud, data connectivity and “other” innovations. The cloud element seems particularly noteworthy.

Formula One teams are notoriously cagey about their technical setups, which run from the sensors and ECUs in the cars, to the trackside laptops the teams fire up to the super computers they use for simulation back at base.

While speaking to the Register at the Woking HQ today, CIO Craig Charlton said the team typically generated 100GB of data over the course of a race weekend. That data has to be processed and analysed to be useful.

On top that, the McLaren organisation has its own super computers running simulations for the F1 team, a design team to support, as well as the IT required to underpin its own super car manufacturing operation, and other research and development operations. And of course, it has all the regular IT systems of any large global organisation. 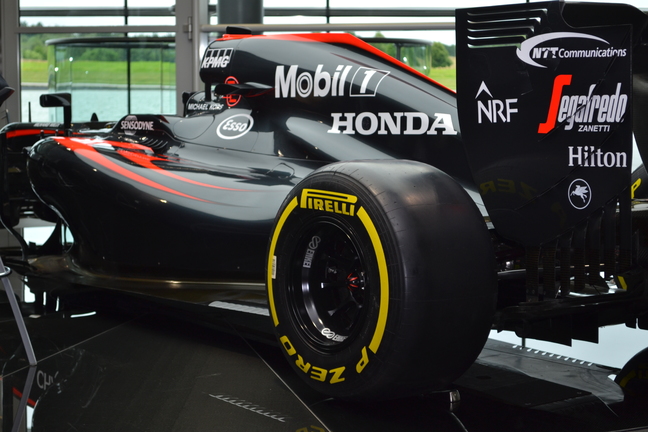 Charlton said the transition to working with NTT had already started, and should be fully up and running in three to four months. He said that as well as end to end LAN and WAN, the pact would cover secure cloud hosting and cloud orchestration, which would give it more flexibility. Currently virtually all its storage and server capacity is on prem.

So it would be understandable that any CIO responsible for this is going to find an overly rigidly setup quickly coming under strain, while at the same time being totally paranoid about the safety of the data which if leaked could scupper an R&D project, or even worse, tip off a rival racing team.

“The whole area of end to end network management including secured cloud hosting, was something we were looking at, so this is perfect timing,” he said. ®