IoT puts assembly language back on the charts

Why polish a Ruby or tailor Swift when you can write code for a toothbrush?

Let's do the time warp again: according to an outfit that tracks programming languages, the Internet of Things is re-igniting demand for assembly language skills.

Software consultancy TIOBE's Programming Community Index has turned up the re-emergence of assembly programming in its monthly index (the definition of the index is here).

While the top-five are no surprise – Java, C, C++, Python and C# – the outfit's post expresses surprise that something so difficult and arcane as assembly would make the index unless it was driven by necessity.

Hence it tags the global movement to put chips in really stupid places just to boast that the device is connected (and in the case of Dyson, to work out how best to extract hundreds of dollars from suckers for a hair dryer).

“The only reasonable explanation for this is that the number of very small devices that are only able to run assembly code is increasing.”

You, too, can program plants if you go back and learn assembly

Assembly hit the top 10 list for the first time, and that put it ahead of languages like Ruby (11th), Swift or Objective-C (14th and 15th, respectively), or the ineradicable but much-mocked COBOL (19th place). 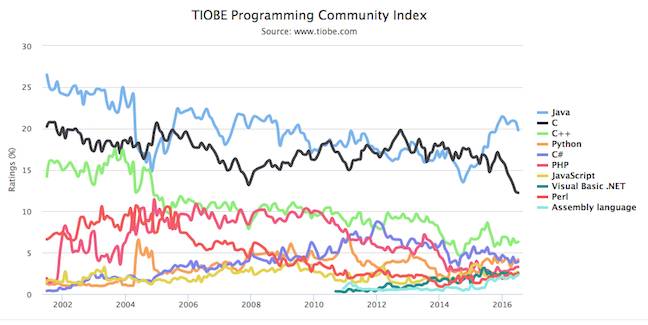 So, if you you can make sense of the assembly language in the Apollo 11 source code that's landed at Github, your day in the sun is on its way. Again. ®