FlashBlade is closer than you think

Analysis In Alexandre Dumas' novel The Three Musketeers, a Gascon outsider, D'Artagnan, and three musketeers – Aramis, Athos and Porthos – take on De Richelieu, the French Cardinal, along with his allies and troops. In our flash systems world there is a parallel: swashbuckling Pure Storage, led by Scott Dietzen, with three product musketeers: FlashSystem, FlashBlade, and the yet-to-be-revealed third product, are taking on storage king EMC and its forces.

FlashArray we know about while FlashBlade is still developing. Stifel MD and financial analyst Aaron Rakers talked to Pure Storage architect and co-founder John Hayes to find out more about the FlashBlade scale-out, all-flash, filer product.

Pure is actively taking orders and progressing to a Proof of Concept (POC) phase.

The current version lacks CIFS support and snaphots. It uses 2D MLC flash and Pure believes that using this on its own flash chip-carrying blades plus an NVMe architecture means it has a lower cost base than it would by using SSDs. It is expected that this will transition to 3D NAND. Rakers notes Quad-Level Cell (QLC) 3D NAND could become interesting for FlashBlade given its architectural positioning for massive pools of low-cost Flash where workloads require limited writes – potentially a 2018 story.

Pure says FlashBlade will have a $3/GB raw cost and sub-$1/GB effective cost after data reduction.

The main competition focus is EMC's scale-out Isilon filer, which was designed in and for the disk era. Pure asserts FlashBlade offers linear performance scaling. Other competitive focuses are Qumulo (a scale-out filer startup), Ceph and Seagate's ClusterStor. El Reg thinks FlashBlade will also butt up against DDN Storage's ExaScaler and GridScaler products and IBM's Spectrum Scale, the old GPFS. 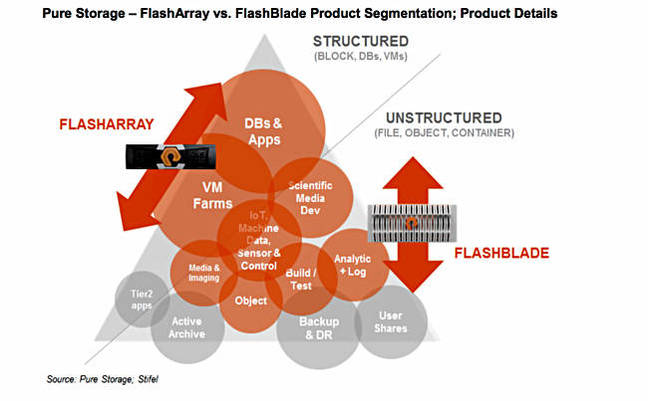 Pure suggests that competitive takeouts will not be the only customer situation, and may not be the main one. In the beta, some customers used FlashBlade in new application workloads. Rakers says storing data is important, but making massive amounts of data available is critical to enable new workloads such as machine learning/log data, IoT, media and surveillance, and commercial HPC.

It seems to El Reg that Pure is currently engaged in a win-hearts-and-minds-exercise with FlashBlade, thinking wallet-opening will follow hearts-and-minds-winning. We're in for a three-pronged, new product, scale-out filer fight between Pure's FlashBlade, EMC's Isilon/Nitro pair and the Qumulo product. We can expect new filer technology to offer object storage scale with better than disk filer performance. ®