Physicists have observed a new behaviour in graphene sheets that causes them to spontaneously grow, tear and peel like self-folding origami.

Carbon is a versatile element and can form many types of bonds with different elements – including itself. Diamond, bucky-balls and graphene are all allotropes of carbon – they are all made out of carbon but have different structures.

Graphene was discovered in 2004 and was hailed as a “miracle material” in the news. Under the microscope, graphene looks like chicken wire. Its arrangement gives it interesting properties that scientists are still discovering.

The paper, published in Nature, shows that thermal activation magically causes layers of graphene to slide, fold, peel and tear strips within itself.

The process happens at room temperature but is accelerated at higher temperatures.

“Graphene has been used in research for over ten years. This process has been probably been happening before people’s eyes but nobody has been noticing. They probably just didn’t realise that this happens intrinsically,” Graham Cross, co-author of the paper and professor at the School of Physics and CRANN at Trinity College Dublin, told The Register.

To observe the phenomenon, the physicists first isolated layers of graphite to produce graphene. Thin two-dimensional ribbons measuring between 300 and 2,000 nanometres in width and up to five micrometres in length were produced from large graphene sheets.

The ribbons were placed on a silicon wafer. Next, a diamond tip was used to puncture the ribbons to form tiny indentations. Thin strands of graphene spontaneously peeled, folded backwards and grew from the edges of the indents. 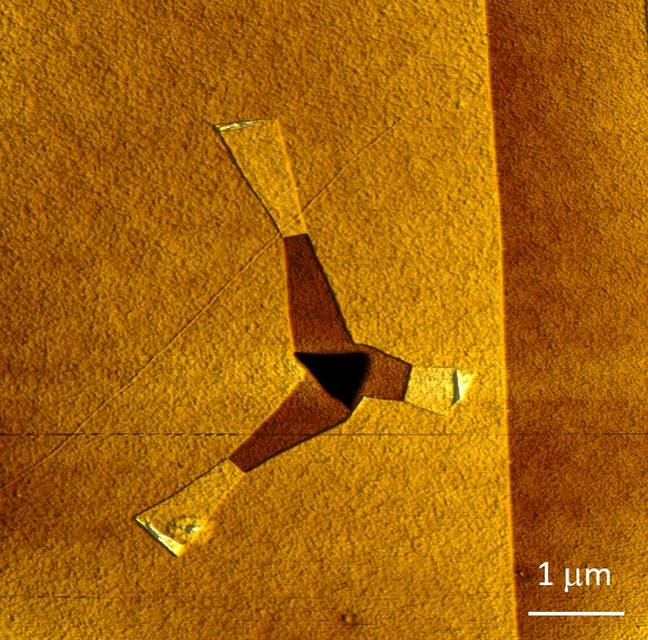 Cross said they had no way to measure how long it took for the process to start, but estimated it was probably “fractions of a second” after the indentations.

The researchers believe that the behaviour boils down to the laws of thermodynamics. Physical systems prefer to conserve energy and occupy the lowest energy state. Cross said that the tearing effect was because “graphene would rather be in contact with itself” as it was energetically favourable.

Graphene samples were heated with a hot plate up to 150oC over 13 days and with a focused laser spot to investigate thermal activation. At higher temperatures, the ribbons grew faster and to longer lengths.

But the behaviour was only exhibited for 70 per cent of the samples at room temperature, said Cross. The strands of graphene won’t grow if there are contaminant particles in the way. At higher temperatures, the likelihood for the behaviour increased as the thermal energy provided the graphene with more energy to push past the contaminants.

This strange behaviour opens the possibility for many applications, the researchers believe. Drugs could be stored in the ribbons, and could be released as the graphene peels back like the opening of a gate.

Although it hasn’t been proved, Cross said the process could be reversible. The layers of graphene could slide back and forth like a switch or open and close like a valve to carry fluids or gas in biochips.

The self-assembly process may be useful in making graphene microchips as it could aid the lithography process.

Cross said he would like to study this behaviour further to see if he could make a sensor device. The graphene flaps oscillate at high frequencies, around 10 – 500 GHz, and could be used to detect and measure radio waves. ®