Dear Tesla, stop calling it autopilot – and drivers are not your guinea pigs 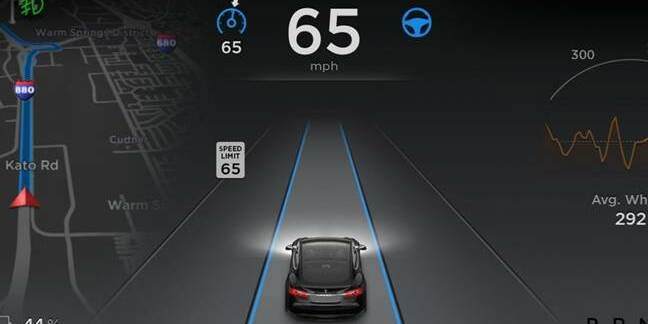 Tesla is misleading drivers about the efficacy of its Autopilot feature and is putting lives at risk, according to Consumer Reports.

The automaker's autopilot system, when engaged, is supposed to control the speed of the vehicle and its distance from other rides and objects – but it's more of a super-cruise-control than a reliable self-driving automatic pilot. And it's not even finished.

Tesla customers are being used as "guinea pigs" for this beta-grade software by Tesla, claimed Laura MacCleery, VP of consumer policy and mobilization for the magazine. She said the US government should insist on proper, third-party testing of the car's software before citizens are allowed to rely on it.

Tesla also needs to work on its advertising, she said, because people should be made fully aware that Autopilot can't actually drive the vehicle.

"By marketing their feature as 'Autopilot,' Tesla gives consumers a false sense of security," MacCleery said.

"We're deeply concerned that consumers are being sold a pile of promises about unproven technology. 'Autopilot' can't actually drive the car, yet it allows consumers to have their hands off the steering wheel for minutes at a time."

While reviewing a Tesla Model X SUV, the publication found that testers could take their hands off the wheel for three minutes before the car flashed up an alert. Since early Tesla buyers are more likely to be enthusiasts wanting to try out all of their expensive new car's features, they are more likely to take their hands off the wheel to try out the system, and take their eyes off the road to prove their shiny new machine works perfectly, MacCleery opined. This is not a good thing, obviously.

Tesla warns drivers that the Autopilot software is in beta and should be used with your hands on the wheel. But the problem is that people are too trusting of the technology.

In a status report [PDF] for its self-driving car program published last year, Google refers to it as "the Handoff Problem" – the amount of time it takes people to take back control of a car after handing over control to a computer.

Research by the US National Highway Traffic Safety Administration found that drivers using automated driving systems took an average of 17 seconds to regain control of a vehicle. That's not good enough if someone steps in front of the car and, while driving at freeway speeds, means the vehicle will have gone over quarter of a mile before human control is reasserted.

"Tesla is constantly introducing enhancements, proven over millions of miles of internal testing, to ensure that drivers supported by Autopilot remain safer than those operating without assistance," the Palo Alto, California-based automaker said in a statement.

"We will continue to develop, validate, and release those enhancements as the technology grows. While we appreciate well-meaning advice from any individual or group, we make our decisions on the basis of real-world data, not speculation by media." ®

Good folk of Forfar: Alan Hattel would like you all to know he's not dead despite what it says on his tombstone

So give him a call FFS