Nano-tech scientists have managed to create the world’s smallest hard disk. The 500TB/inch2 disk can store a kilobyte of memory in a few tiny chlorine atoms, according to new research published in Nature Nanotechnology.

Atomic memory is an attractive idea as only a few nanometres of space are needed to store a bit.

A team of researchers led by Delft University of Technology (TU Delft) have managed to devise a new method in atomic memory which could potentially outperform state-of-the-art hard disk drives by “three orders of magnitude”.

To prepare the atomic hard disk, copper chloride (CuCl2) powder is heated to 300˚C on a copper surface until it evaporates. This forms a layer of chlorine atoms which are positioned in a square lattice structure on top of the copper.

The square grid isn’t perfect, however, as chlorine atoms don’t fill the space evenly and there are gaps.

The imperfections are vital for the hard disk, as a scanning tunnelling microscope (STM) interprets a vacancy to the left and right of a chlorine atom as a 0 and 1 respectively.

A row of chlorine atoms prevents vacancies from being directly adjacent to one another, so it takes six atomic sites to make a bit and 48 to make a byte.

Data is written and read by moving the vacancies around like a sliding puzzle. A STM with a metal tip scans the surface and electrons can jump from the tip to the surface producing a current through quantum tunnelling.

To switch an chlorine and vacancy pair, the STM tip zaps the space in between the pair and excites a chlorine atom to make the jump to fill a hole, whilst it leaves another in its wake.

The constant sliding back and forth of atoms means that data is rewriteable - an improvement from previous atomic memory studies, Sander Otte, lead author of the study and researcher at the Department of Quantum Nanoscience at TU Delft, told The Register.

'There's Plenty of Room at the Bottom'

Researchers have demonstrated their method by writing a passage from There’s Plenty of Room at the Bottom - a famous lecture about storing information by manipulating atoms given the physicist Richard Feynmann - onto a size smaller than the width of human hair. 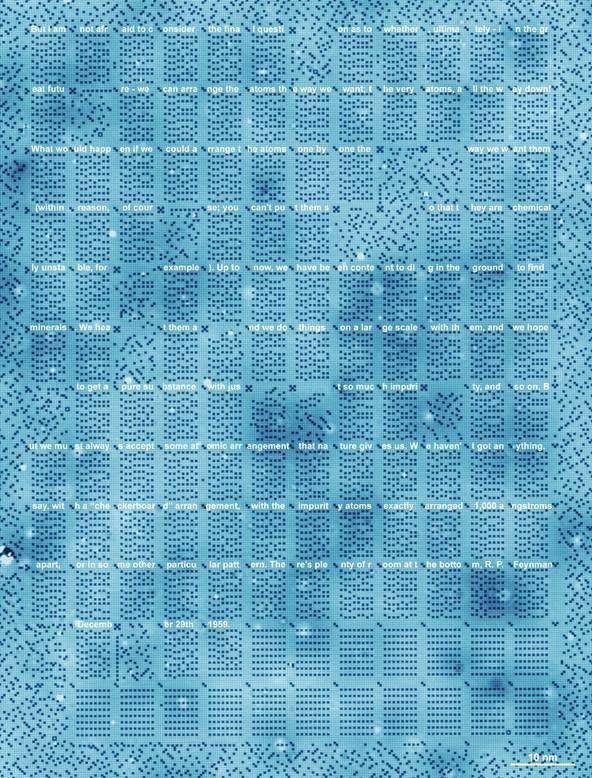 Passage from There's Plenty of Room at the Bottom. Photo credit: TU Delft/Ottolab

To navigate through the large forest of zeroes and ones and read the data quickly, researchers have created a system of atomic markers that act like tiny QR codes, Otte explained.

The markers encode information that direct the STM tip where to start and stop reading information. 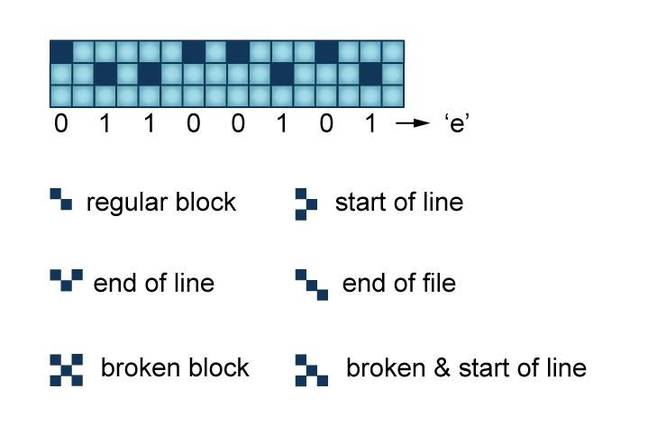 "In theory, this storage density would allow all books ever created by humans to be written on a single post stamp", said Otte.

Research into newer methods of storage have been explored by academics and industry as the desire to cram more memory into smaller spaces grows.

IBM have been exploring phase-change memory cells made out of a chalcogenide alloy that contains a mix of sulphur, selenium or tellurium. Magnetic storage is another emerging area, and has the potential for multi-cell memory, which offers more than two states often used to encode a bit.

At although the atomic hard disk has a storage density 500 times greater than the best commercial hard disks used today, there is a high price to pay for its stability. The hard disk has to be stored at -196˚C to control the vacancy positions in the lattice.

For future research, Otte and his team want to explore other areas beyond storage. “I would like to emphasize that in my view the true importance of this work is not necessarily the data storage itself.

“This large kilobyte memory should rather be seen as a demonstration of how well we can now organize the world of atomic precision. Who knows what possibilities will arise once we can start to design and build our own functional nanomaterials rather than being limited to the materials that nature provides us.

“Or what clever new quantum technologies we may come up with when we can create all kinds of circuits on the atomic scale,” Otte told The Register. ®