You WON’T BELIEVE THE ANSWER

Sketch So, what, if anything, keeps former New York Mayor Rudy Giuliani awake at night? Actually, he told a BlackBerry event today, there is this one thing.

“You gotta always worry about a nation with an insane leader,” he told startled attendees.

Well, Rudy. It’s funny you should say that.

Giuliani had flown overnight from Cleveland, Ohio, after giving a restrained speech at the Coronation of The Donald. That's this year's Republican National Convention at the Quicken Loans Arena, where party delegates will vote to make Donald Trump their choice of keeper of the nuclear launch codes in this year’s US presidential election.

What’s Rudy's logic here? Perhaps the logic is: it takes one to know one.

An old friend of BlackBerry CEO John Chen, Giuliani told a surprise audience of some 400 BlackBerry partners, journalists and analysts at BlackBerry’s annual Security Summit in NYC that cybersecurity was his “last crusade.”

“We hide important information. Information about law cases, about new inceptions, about medical conditions,” he explained. “All this is locked up. Now all of this is” – and Giuliani made an arc shape with his hands – “here.” 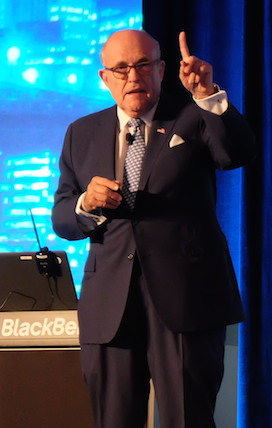 “We have got to find the same solutions we had for physical information for digital information and cyber information. And BlackBerry is, because of its beginnings, the way it's grown and the way John has repurposed it, he has some of the most innovative and creative solutions to cybersecurity that any company I have looked at or talked to,” he said.

Giuliani related his work “busting the Columbian drug cartels and the New York mafia,” before pausing to qualify it a bit. “President Santos broke the cartels – I gave them a lot of help,” he said.

“Blackberry began as a secure phone,” he added. [Are you sure? – ed.] Giuliani relayed how BlackBerry’s point-to-point security had allowed him to keep control during the September 11 attacks in 2001.

"You know what saved us [on 9/11]? BB’s point to point service," said the former mayor. "They all had point to point service. It worked through the original attack, when the second building came down, it worked all day. I gotta tell ya, it saved lives and made it possible for me within a half hour to restore our complete command center, even though our command centers were out of power."

BlackBerrys can’t do that any more, of course.

So anyway. Why the "insane leaders"? What else was worrying him? Go on. Do tell.

(I was beginning to get the hang of decoding a Giuliani keynote after a few minutes.)

“Those are the ones who worry me because we don’t have a Mutually Assured Destruction (sic) for them.”

“Nations. Well, you gotta always worry about a nation with an insane leader."

He was less worried about the traditional rogues gallery.

“Iran won’t cyberhack us. We’ll cyberhack them back! Just like we did with Israel. Allegedly. And I underline the word allegedly.”

After the BlackBerry event Giuliani headed straight back to Cleveland. That’s devotion. And we’re told he waived his fee. ®