Spiroplasma, a small helical-shaped microbe, is responsible for bringing out a ‘male-killing’ instinct in African Queen butterflies, according to research published in the Proceedings of the Royal Society B: Biological Sciences.

A team of entomologists collected African Queens (Danaus chrysippus) - a medium-sized butterfly with bright orange wings - for over 13 years around Nairobi, Kenya. Over time, they realised that a narrow zone in Nairobi often contained no male African Queens. The males would only appear after the rainy season and then mysteriously vanish again.

On further inspection, researchers realised that the eggs laid by African Queens had a peculiar pattern. Male caterpillars never hatched. Female caterpillars, however, would emerge ravenous and ingest their egg shells containing proteins before chomping their way through the eggs of their unborn brothers.

The act of caterpillar cannibalism was whittled down to a microbe known as Spiroplasma that commonly affects African Queen butterflies. When the butterflies were treated with an antibiotic that cures the bacterial infection, the male caterpillars hatched and were not eaten by their sisters, Richard Ffrench-Constant, co-author of the study and Professor of Molecular Natural History at the University of Exeter, told The Register.

This was only true in for African Queens in the narrow zone, where two subspecies of African Queens met. African Queen mothers on either side of the zone bore healthy sons and developed an immunity to the microbe. 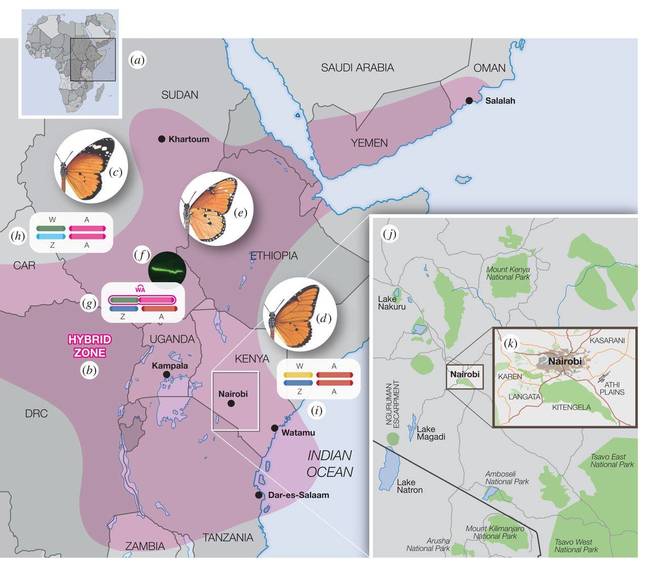 Map of the hybrid zone. Photo credit: Proceedings of the Royal Society B: Biological Sciences

To sustain the male-killing species population in the narrow zone, male immigrant African Queens would swoop in to the female-friendly zone during the rainy season to mate.

The females outnumber the males approximately 5:1 and to achieve 1.7 pairings, the males must mate an astonishing 8.5 times - until they’re exhausted, the paper said.

“Imagine you’re walking into a bar and it’s full of females. The opportunity to mate is enormous but it’s a futile attempt at producing any heirs,” Ffrench-Constant told The Register.

The scientists don’t fully understand how the microbe affects the female African Queens’ genes yet. But, they have found a promising clue.

The females in the narrow zones had W chromosomes which had fused with another chromosome, creating a “neo-W chromosome”.

"The neo-W effectively acts as a genetic sink for all males, and butterfly populations around Nairobi are nearly all female,” said Dr David Smith, lead-author of the study and formerly from the Natural History Museum at Eton College.

This genetic sink also keeps the subspecies of butterflies, inside and outside the zone, distinct. The study shows that environment isn’t the only factor that can drive evolution; microbes can too.

"It appears that the butterfly's susceptibility to the male-killing microbe is driving the separation of the two butterflies into two true species. These tiny microbes are therefore having a major effect on sex and death in this fascinating butterfly," said Ffrench-Constant.

The next step to forming a conclusive link between the cannibalistic behaviour displayed in infected butterflies and the fusing of their chromosomes is to sequence the DNA of the ‘neo-W’ chromosome, Ffrench-Constant explained.

Just cough into your phone, please... MIT lab thinks it can diagnose COVID-19 from the way you expectorate

Coming soon to an app, maybe

Updated Why? Because it's 2020. Oh OK, the real reason is: More efficient use of on-board cameras