Three independent sources say XtremIO is headed for a maintenance-only retirement home. One says the killer problem is that XtremIO memory cannot scale in line with SSD capacity. Another says there is an availability issue.

One source told us: "I've heard they are putting XtremeIO into maint' only. No more development, will phase it out over Unity. How they do their metadata is too much of a challenge and they can't do larger drive sizes because of it. Also very high profile customers had massive failures that resulted in data loss – dedupe table corruption – and it's caused them to pull the plug on it."

The source's conclusion is that this "explains the refocus on VSAN AFA and ScaleIO, Unity release and the AFA VMAX. EMC will obviously deny this, but this is what I and several others have heard."

An EMC insider told us: "This is a ridiculous rumor. XtremIO is now worth a fortune in revenue to EMC so that isn't happening. I expect the FUD to fly as the Dell acquisition closes."

XtremIO CTO Itzik Reich told The Register: "Not sure who are the sources but that's a total BS. Don't be FUDded by competitors who have a tiny fraction of our market share.

"As the CTO, I can tell you that the investment in XtremIO is only growing in 2016-2017 and beyond. We are working on tons of new stuff as we are barely scratching the surface with the XtremIO architecture – think content awareness beyond the array itself. Our measured field reliability is in the five nines."

EMC spokesperson Dave Farmer added: "It's official. I now have heard everything. XtremIO is the fastest-growing storage product ever. By 'kill off' they must have meant 'double down.' No truth whatsoever."

EMC SVP Michael Wing said about the rumor: "Not even remotely close to being true. It's still the number one all-flash array in the industry by a very wide margin and our clients absolutely love it. We are over investing in engineering to continue to improve the best all-flash array on the market. Tell our competitors who are likely spreading the rumors that they wish we were shutting it down."

The onset of 3D NAND is driving SSD capacity far higher, with Samsung already shipping a 15TB SSD. EMC's refreshed VNX, its Unity line, will support 7TB SSDs in August, and 15TB ones by the end of the year. HPE's 3PAR StoreServ line will support 7.68TB and 15.36TB SSDs.

XtremIO was bought for $430m by EMC in 2012 when it needed a ground-up, new design, all-flash array to compete with startups like Pure Storage, Kaminario, SolidFire, Violin Memory and others. The XtremIO product was a scale-out design and the purchase was stunningly successful.

The product was announced in March 2013, and sales streaked ahead. The last 2015 Gartner and Stifel analysis said it had $384.6m in revenues, exceeding a billion-dollar annual run rate, and was the outright market leader – a long way in front of second-place IBM with its $189.1m FlashSystem revenues. 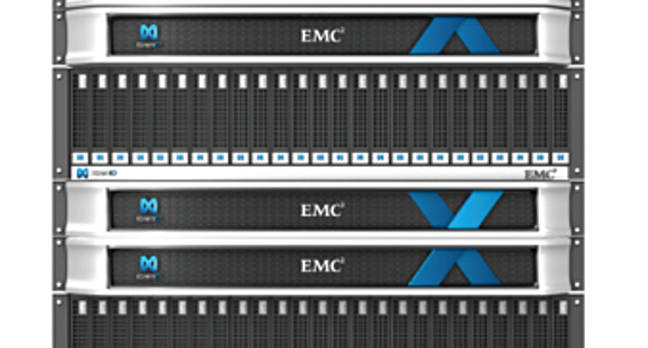 During this time, EMC has developed all-flash VMAX and VNX (aka Unity) arrays as well as buying DSSD for high-end, scale-out, ultra-fast network-linked, rack-scale flash array technology. Pure Storage has emerged as the leading all-flash array startup and IPO'd last year. It is in a pack in the $80m-$200m per quarter revenue area with IBM, NetApp and HPE, all chasing EMC and failing to catch up.

From EMC's point of view, XtremIO FUD wars have erupted in earnest as XtremIO leads the all-flash array pack by a mile and the Dell-EMC combo is set to dominate on-premises and hyperscale storage sales. ®