Intel and pals chuck money at another Fibre Channel killer

So Fibre Channel and iSCSI external array access are poised to be devastated by NVME over Fabrics (NVMeF) and Kazan is developing a hot little ASIC number that it claims could wield the knife.

The company was founded in December 2014 by people with a storage networking (Emulex/QLogic) systems background: CEO Joe Steinmetz, VP Engineering Murthy Kompella and CTO Mike Thompson. It is a fabless semiconductor company developing ASICs to accelerate flash storage access in enterprise and hyper-scale data centres. Steinmetz was a VP for ASIC engineering at Emulex. Thompson was an engineering director at Emulex and Kompella a senior director of ASIC engineering there.

Bryan Cowger is VP for sales and marketing. He was a co-founder at Sierra Logic which Emulex bought in 2006. He has patents, with Steinmetz, Thompson, Kompella and others, for Fibre Channel technologies; no lightweight marketeer he.

Kazan is developing ASIC hardware and firmware for NVMe over Fabrics (NVMeF) and aiming to implement the full IO path in hardware, including RDMA engines. Its aim is to develop the lowest katency controller it can, so that data access to shared, external all-flash arrays occur almost as fast as accesses by the server to its local NVMe flash drives; we're in the sub-1us latency realm here.

Other NVMeF controllers, it says, use commodity microprocessors running firmware. Kazan's intent is to move as much functionality as it can form that firmware into its ASIC hardware and so run it faster, lowering latency.

The technology implements both varieties of RDMA acceleration over Ethernet, with simultaneous RoCE and iWARP support.

As WDC owns SanDisk, partners Toshiba in flash foundry production, and has the InfiniFlash SSD JBOF in its product line you can see his point.

Jay Chong, Vice President at Samsung Ventures, had his canned quote: "Kazan Networks is developing products that are enabling the overall NVMe over Fabrics ecosystem, and we are happy to participate in their Series A round."

As did Amber Huffman, Intel Fellow in the Non-Volatile Memory Solutions Group at Intel Corporation and chair of the NVME Express Workgroup: "NVMe over Fabrics is a key enabler to support attaching thousands of NVMe SSDs in modern rack-scale designs. Kazan has been a leader in the standards definition, and their products enable the ecosystem to connect storage to the fabrics in an integrated manner.” 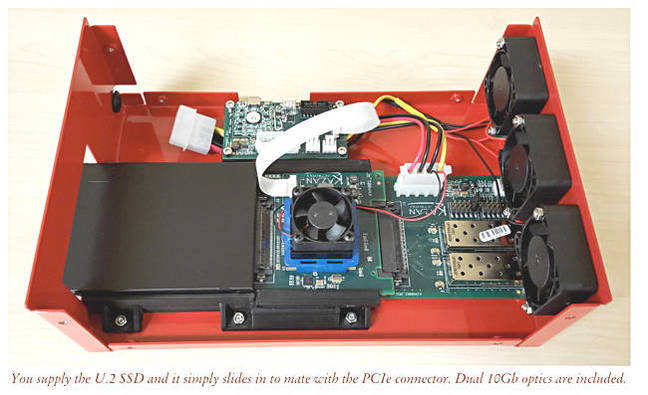 There is a KN-EVAL_1.0 customer evaluation kit, said to be a fully functioning NVMeF implementation, and based in an FPGA. We might expect first product in 2017.

Kazan Networks is a hot little company. It's based in Auburn, California, and is another potential Fibre Channel and iSCSI killer. It and Mellanox, with its BlueField SoC, will provide NVMeF interconnect/controller hardware.

Apeiron, EMC-DSSD, Excelero and Mangstor are accelerated NVMe flash drive array suppliers with product already out there. E8 will join them next month. Kaminario and Tegile have serious NVMeF adoption developments.

It's obvious more will follow, and virtualised and containerised app servers will run much faster with NVMeF array access. Trad FC/iSCSI arrays will be left behind like lumbering rhinoceros'.

Listen up flash array suppliers. If you don't have NVMeF access being evaluated for your arrays then you are the walking dead and don't know it. Your products will be squeezed to death between the onrushing forces of hyper-convergence, the public cloud and NVMeF-accelerated arrays from your competitors. Get real and join the NVMeF party. ®