NVMeF is a way of connecting an array of external NVMe flash drives to accessing servers over a network link that is so fast array data access are the same as ones to local, directly connected NVMe flash drives. Vendors like EMC with DSSD and Mangstor have product available now. E8 will launch at next month's Flash Memory Summit. Kaminario and Tegile have plans to adopt the technology, and both NetApp and Pure Storage are keeping a close eye on it.

During the call Waldman said: "Integration efforts between EZchip and Mellanox have been ongoing since the acquisition closed in late February. During the second quarter, we announced the first joint product, our multi-core system-on-a-chip solution named BlueField. BlueField combines multiple ARM cores interconnected by a coherent mesh network with the leading ConnectX-5 network adapter. Initial target markets include storage and network applications."

In storage the multi-ARM core BlueField system-on-a-chip (SOC) could act as a controller for a group of NVMe flash drives, with access over 25/50/100 Gbit/sec Ethernet.

He said BlueField is designed to support increasing demand from high-performance storage networks such as NVMe with IOs heading to 20 Gbit/sec and beyond per drive.

Waldman sees opportunity with NVMeF: "NVMe over fabrics is a new micro trend emerging in storage markets offering customers a replacement for legacy Fibre Channel installations. We believe this trend will result in multiple opportunities for revenue growth from BlueField in 2017."

The BlueField product will begin shipping in 2017. 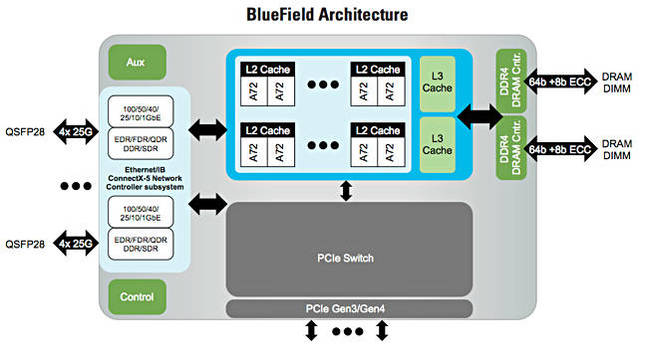 So we can let imagination fly and envisage your average external storage array using BlueField SoCs to transform itself into a network access latency killer. Seagate's DotHill and ClusterStor arrays could use this. Ditto Nexsan, Dell Compellent arrays, HDS VSO, etc, etc. The 2017-2018 period could see a pretty sustained attack on Fibre Channel and iSCSI storage array access from NVMeF. ®