Judgment to be delivered after the summer holidays 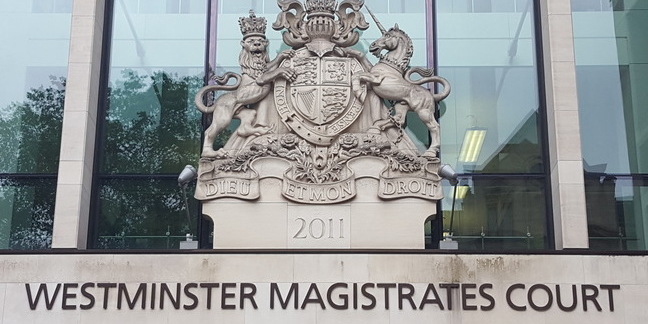 Westminster Magistrates' Court, where the case was heard. Pic: Alexander J Martin for The Register

Lauri Love will not find out whether he will be extradited to the US until September, District Judge Nina Tempia said today at Westminster Magistrates' Court.

Judge Tempia will hand down her judgment on the US authorities' attempt to have Love handed to them for trial on Friday 16 September at 2pm.

There were more than 20 extradition hearings taking place in Westminster Magistrates' Court today, including that of Love. The 31-year-old is being sought on three indictments alleging he “carried out a series of cyber attacks against the websites and computer systems” of the US government, military, and private sector.

The allegations against Love concern his alleged activities during #OpLastResort, a series of online protests which followed the suicide of Aaron Swartz. Swartz was perceived to have been persecuted by the US government after being accused of hacking into academic library JSTOR.

If extradited and found guilty in the US, Love faces a maximum of 99 years' imprisonment.

Both the defence and prosecution delivered their final arguments this morning, in Court One of Westminster Magistrates' Court.

Love's lawyer, Ben Cooper, again argued that his client's extradition should be refused under the “forum bar” of section 83A of the Extradition Act 2003. This bar was introduced following the then-Home Secretary (and now Prime Minister) Theresa May blocking the extradition of Gary McKinnon to the United States because of the increased risk of suicide this posed to him.

It is a key part of Love's defence that he would be at risk of suicide if extradited. Professor Simon Baron-Cohen, director of the University of Cambridge's Autism Research Centre, said, in his view, “there is absolutely no question that [Love] has Asperger's [Syndrome]” as well as severe depression and aggressive anxiety-related eczema, and was at a “very high” risk of committing suicide if imprisoned within the US system.

Speaking to The Register, Nicole Powers of the Courage Foundation, an international group that supports “those who risk life or liberty to make significant contributions to the historical record” stated that the case is the first major test of the forum bar: “We're seeing if this law has teeth or whether it just paid lip-service to the outcry following the McKinnon case.”

Peter Caldwell was the Crown Prosecution Service's barrister – the CPS represents requesting states in all extradition cases – and he argued that Love's threat to commit suicide was an attempt to spite the court. He recommended to Judge Tempia that she separate whatever influenced the Home Secretary to refuse Gary McKinnon's extradition from Love's case.

Appearing for Love, Cooper described Caldwell's efforts to downplay Love's health issues and suicide risk as “disgusting”, noting that the defence had provided much evidence, including expert witness testimony, of Love's history of mental illness. He referenced the inadequacies of not just mental healthcare but healthcare in US prisons in general.

Love had a long history of mental illness, the court was told, including losing all of his hair when he was 15. He had been prescribed antidepressants on several occasions and referred to psychiatrists several times, said Cooper, and it was “impossible to predict the severity” of his reaction to extradition. At an earlier hearing, Love's father, the Reverend Alexander Love, a prison chaplain, had testified that he feared and believed his son would commit suicide if extradited to the US.

The prosecution said that Love was the source for much of the history of his mental health problems and that little existed, including his diagnosis of Asperger's Syndrome, before the extradition case had been opened.

Cooper argued that single venue and single prosecution in the UK would be preferable to the three prosecutions in the United States. It would be “more efficient... speedier... and enables the mental health considerations to be given full account,” argued Cooper, who stated: “There's no good reason why an English prosecution would do anything to let down the complainants in this case.”

The prosecution disagreed, stating that while much of the evidence was portable, “you may well find that certain details of the case may be readily available, but not all.”

One issue regarded an informant witness whom it was known was prepared to assist the US in their prosecution, but it was not known whether they would be willing to help the UK. "There is no guarantee that the witness evidence would be available in the UK for a domestic prosecution," argued Caldwell, on behalf of the US authorities.

Cooper had noted the ease of transferring both digital evidence and witness evidence in the prosecution of Mustafa Al-Bassam and Ryan Ackroyd, who were members of the Lulzsec hacking crew. In the domestic prosecution of the UK-based members of Lulzsec, an informant witness, Hector Xavier Monsegur (AKA Sabu), the de facto leader of the group, had provided evidence.

Prosecution in the UK would be in the interest of the victims, argued Cooper, as the mental health factors affecting Love may compromise the prosecutions in the US, preventing the victims from accessing justice.

In the US Love would “surely be denied bail, as anyone who is extradited doesn't meet the criteria for bail as they have no ties to the country. As a matter of course he will be placed in jail and be unable to participate in his own defence, as well as being separated from his parents and support system,” the Courage Foundation's Powers told The Register.

Once Judge Tempia hands down her eventual judgment, whichever side loses is very likely to appeal, thus sending the case to the High Court. ®

Fine, we'll do it the Huawei, says Uncle Sam: CFO charged with fraud, faces extradition to US over Iran trade claims