Mobile broadband now cheaper than wired, for 95 per cent of humanity

But the Internet of Things is only working in Fjordland

The International Telecommunication Union (ITU) has released the 2016 edition of its Facts and Figures (PDF) on technology adoption, and among the many data points it contains is an odd concentration of connected “things” in countries with Fjords.

Sweden handily tops the table of nations when one counts machine-to-machine accounts per 100 cellular connections, with 50 per 100. Next comes New Zealand, Norway and Finland, with France in fifth place.

A rather less obscure number can be had when one counts the number of people who can now get a mobile phone to work: the ITU reckons 95 per cent of us can now get at least one bar of coverage.

The numbers are less impressive when one considers internet use: 53 per cent of us are not on the 'net. 75 per cent of Africans aren't online and even in Asia 58 per cent of folks aren't able to watch cat videos on demand. That latter figure comes despite China having 230 million households online, compared to 60 million in India. 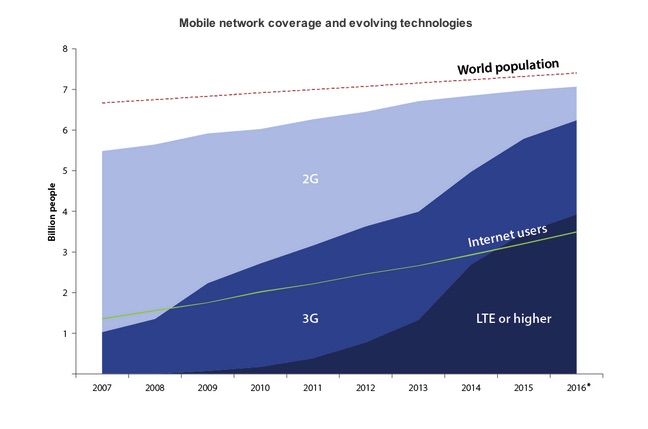 Wired planet: nearly everyone can get a mobile signal now

Another interesting data point: The average price of a basic fixed-broadband plan is more than twice as high as the average price of a comparable mobile broadband plan.” In the world's least developed nations, fixed services cost three times more than mobile services. No wonder mobile broadband connections are growing fast, with the ITU predicting 3.6m subscriptions by year's end, up from 2015's 3.2m. Fixed subscriptions are in the minority: there will be 12 per 100 people by the time 2016 closes.

But even if someone in a developing nation can get online, they'll get a lousy connection as poorer nations lack good connections to the outside world. The average African country has just six internet hosts.

The ITU's take on the numbers it presents is that they represent decent progress towards sustainable development goals, but that digital divides persist across economic and gender lines.

Detailed data from which the PDF we linked to above was drawn can be found in two Excel spreadsheets. ®