The merger comes after Citrix axed 1,000 staffers in November and threatened to spin off GoTo.

The gobble is worth $1.8bn in shares, and effectively puts remote desktop developer LogMeIn in charge of GoTo, Citrix's remote access and conferencing family. LogMeIn CEO Bill Wagner will run the combined operation, which is expected to bank annual revenues of $1bn or more.

It also means LastPass – bought by LogMeIn for $125m in October – now falls under the GoTo umbrella.

LogMeIn had subscription sales of about $270m last year, and GoTo brought in $600m. The GoTo family includes GoToAssist, GoToMeeting, GoToMyPC, GoToTraining, GoToWebinar, Grasshopper and OpenVoice. The merged GoTo-LogMeIn will have more than two million customers in virtually each country, we're told, and the Reverse Morris Trust deal has been approved by Citrix's and LogMeIn's board of directors. It'll be a tax-free maneuver, in other words. 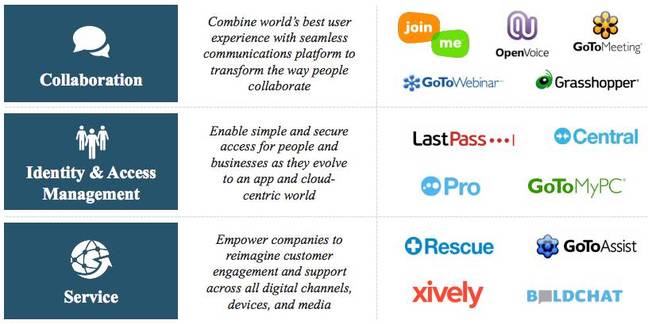 How Citrix's GoTo and LogMeIn see themselves fitting together ... Source: Investor presentation slide

LogMeIn's Ed Herdiech will be chief financial officer of the combined operation, and some of GoTo's management team will join the outfit as well. It will be overseen by four Citrix directors and three LogMeIn directors; LogMeIn chairman Michael Simon will chair the board for the merged company. There needs to be a shareholder vote, plus the usual regulatory approvals, before the deal can complete in the first quarter of 2017.

The new biz will be headquartered in Boston, where LogMeIn is based. A bunch of LogMeIn staff moved into renovated office space in San Francisco just over a year ago, right above El Reg's floor. Citrix is based in Fort Lauderdale, Florida. ®

Citrix can do this too. Hyperconverged infrastructure's salad days serving virtual PCs might be ending
Virtualization18 Oct 2022 | 3

Years after the company quit server virtualization, but may be handy for hybrid work
Virtualization5 Aug 2022 | 3