Washed out summer? Fear ye not: DVDs for DevOps droogs

Stob Hurrah! Summer is at last well under way, so how better to pass the weekends than pulling the curtains on the rainscape, lolling on the sofa and inhaling a few dozen hours of downloaded TV? I am aware that such an introduction sets up certain expectations.

However, rather than treat you to ill-informed speculation regarding Cersei Lannister's opening gambit in Season 7, I am going to set the bar higher: I will confine myself to dramas that deal specifically with our own avocation.

Hic sunt no bloody dracones, as they rarely say in Westeros – or, indeed, anywhere else.

(Although – and this is just a quickie since you did mention Thrones – you could settle one point for me. Am I the only one who, whenever young Dany emerges naked from a conflagration with her fantastic blonde wig un-singed and the firelight gleaming on her nipples, hears the voice of the late Sir Kenneth Everett asserting that it is all done in the best possible taste? I am? Oh, okay.)

Halt And Catch Fire – Season One

The title of this epic is explained thus: 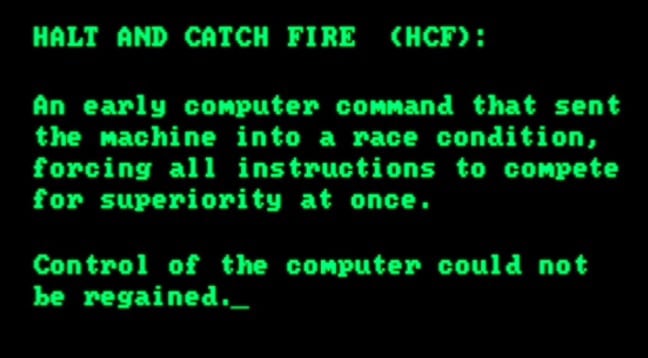 The battle for Cntrl

Which sounds not quite right. All instructions competing for superiority at once, huh?

It is 1983. Ex-IBM salesman and Virgil Tracy puppet lookalike Joe MacMillan mashes an innocent armadillo as he speeds along in his Porsche. This is a man (we discover) who keeps his ties, artfully crumpled, on teeny display shelves fashioned from clear plastic. One tie per shelf. From such details, we are to infer that Joe is a Visionary.

Joe talks himself into a job at Cardiff Electric. This outfit turns out not, as an ignorant Brit might guess, to be Jones-the-Three-Pin's washing machine repair business. Rather, it is a mainframe system software company located in Dallas. Also working at Cardiff is Gordon Clark, a hardware engineer with thwarted dreams of designing his own computer, and played by an actor with the fabulous name of Scoot McNairy. Joe and Gordon scheme together to inveigle Cardiff into the IBM PC-compatible business.

There follows my favourite scene of the whole series. Gordon drags a victim IBM PC into his guh-raj, cracks open its carcass and points dramatically to a row of chips on the motherboard. "The ROM BIOS is on one of these chips. We just don't know which one!" Never mind. An oscilloscope and a little voltage probe prodding swiftly winkles out the ROMmy blighter, and before you can say "Wozniak" it has been desoldered and plugged into a bread-boarded lash-up festooned with LEDs. 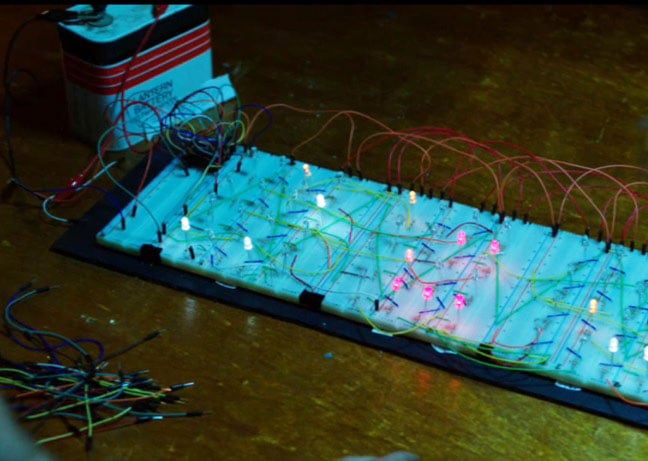 LEDs get lashed... together

Joe wonders, not unreasonably, what they are doing. "Each group of four LEDs represents a hex digit", explains Gordon, pronouncing "LEDs" to rhyme with "heads", just like a dork. Or maybe that's how it is done in Texas. "I understand hexadecimal code," sniffs Joe, who does not wish to be considered technically provincial. Undeceived, Gordon patiently explains about bits and nybbles. Joe is appalled. He asks, "How many of these addresses do we need to transcribe?" "65,536" replies Gordon. Joe is thoughtful. "Couldn't we just knock up a five line BASICA program to PEEK it out of memory and print it? I wouldn't mind getting home in time for Columbo."

OK, so I made up that last bit. With uncharacteristic application, Joe writes down every last byte in a notebook, in biro. Finally, rather mysteriously, the boys are somehow able to reprint the whole dump out on their Epson dot matrix. Perhaps they adopted my BASIC suggestion after all, off-camera.

To address their frankly dismal shortage of software smarts, the lads hire the third principal character, college dropout and arrogant techno-chick Cameron Howe. Her task is to reimplement the PC BIOS and subvert IBM's copyright. Cameron wears her hair bobbed like Purdey's in 1970s fave The New Avengers, but in other respects she is way ahead of her era.

She predicts the rise of the internet. She writes her C code with prescient ANSI function prototypes instead of clumsy, contemporary K&R. She runs her voice at a deep, 21st century pitch, a perfect fourth lower than the 1980s norm, with a double portion of vocal fries on the side. She likes to sketch out her assembly language routines in lipstick on the mirror in the lavatory – something I think we have all done at one time or another, and which approach I believe is soon to be mandated in the stricter Kanban shops.

Does Cameron write all her code at full typing speed with both hands? (No mean feat with clacky 1980s key travel; talk about getting your fingers to do the walking.) Of course she does! She interrupts this formidable show of productivity only to accept refreshment in the form of 25 second bouts of perfunctory, mostly-clothed sex with Joe. But then Joe, acting for once in a managerial rather than amorous capacity, happens upon Cameron designing a bit-mask on the white board and Not Actually Typing. He is shocked – shocked, I tell you! – and immediately accuses Cameron of slacking off. An authentic sketch of a widespread 1980s managerial attitude to software design.

I do enjoy Cameron's occasional flirtations with practical software development. In an episode in which she is miserably condemned to code a driver for a printer that hasn't even been written into the plot, Cameron even gets to cite The Mythical Man Month and apply Brooks' Law. Cor!

But I mustn't mislead you. These incidents aside, it is rare in Halt And Catch Fire that anyone ever says anything that one can imagine being said in real life.

Consider the moment when Gordon's wife (to whom you haven't been introduced: suffice to say she is a brilliant but under-appreciated hardware designer for Texas Instruments, also an All-American SuperMom-of-two whose hobby is playing tricky romantic piano concertos on a Casio Plink-E-Plonk 29fx hidden in her basement. She can play even faster than Cameron can type) has expertly manipulated a corrupted floppy disk's File Allocation Table to rescue the only copy of some valuable assembler source.

As M*A*S*H was to Catch-22, so Silicon Valley is to Microserfs. ( In a good way. We're talking early, pre-Colonel Potter M*A*S*H, without the schmaltz and advertising for IBM, obvs.) A spirit first articulated in these novels is carried forward. I'd risk the word "zeitgeist" about here, if I believed that I could convince you that I understood what it meant.

Anyway, Silicon Valley is a single-camera comedy (it's made by GoT creator HBO, so one would have thought they had the resources to run to two cameras, ho-ho) and thus laugh-trackless... but by no means humourless. Indeed it is one of those rock solid, ingenious sitcoms at which US TV sometimes excels.

It is set in the present day. The main character is affable-but-quiet programmer Richard Hendricks. Like Cameron and Bill Gates and bloody everybody, Richard is a college dropout. He, Richard, is also a coding genius. He learnt Ruby on Rails in one weekend – that's how good he is. Richard has devised a new lossless compression algorithm of unprecedented efficiency. Rejecting buyout offers from Hooli – the series' fictional Googlish giant corporation – Richard recruits his techie, all-male housemates to form start-up Pied Piper. The comedy proceeds as an ensemble piece centring on the five Pied Piper coworkers.

The most notable of these is landlord Erlich Bachman, who resembles South Park's Eric Cartman so closely in temperament and shape that I assume the similar moniker is deliberate. Many of the comic plotlines are driven by Erlich's aggressive brand of greed, self-regard and stupidity. Incidentally, he also has a fantastically strange beard, even by modern standards.

The script gives the boys an environment which is not only reliably funny but also feels technically realistic. For example, Pied Piper software development is tracked using sticky note "stories" on a Scrum task board. (Back at Cardiff Electric, they perform this function with a conventional table of jobs and programmers which their know-nothing script writers call – wait for it – a flow chart. D'oh!)

I really like this sort of honesty. When a plotlet hinges on an outside contractor coming in and messing up the Pied Piper code base, my first thought was: Nah! That could never happen. They'd just git back to an earlier revision. Then I realised that it was the database schema that the miscreant had corrupted, and I stopped sneering and instead was overcome by an inability to recall the last time I had dumped our schema script into Subversion.

There you are. Not just entertainment – it's useful too. But one rare technical issue that is never satisfactorily resolved: what programming language(s) are the boys using? The issue seems confused. I thought I glimpsed some on-screen Python over Richard's shoulder at one point. But then somebody posted this YouTube fragment. (The scene comes from Silicon Valley's third season, so is strictly speaking out of my scope; please cut me some slack here.)

Never mind the tabs/spaces debate. The excerpt definitely establishes that Richard indents with eight spaces. Eight. So when he is four or five Python block levels in, he is going to need to hold a ruler up to his screen just to read off the line number. Nobody codes with tabs set that wide...

...unless he is writing in assembler.

Tip for you, Richard. Nothing like a drop of vinegar for getting lipstick off lavatory mirrors.

Verity downloaded her copy of Halt and Catch Fire from iTunes, although Amazon offers it too, and many others for all she knows. She discovered she had already got free access to Silicon Valley as part of a Now TV entertainment package; if you subscribed for Thrones you may have too. ®