You can't get internet there, but Giant Red Spot is clue to 'energy crisis'

Jupiter’s Great Red Spot may be responsible for stirring an atmospheric hotspot into a frenzy, causing it to be hundreds of degrees warmer than anywhere else on the planet.

Researchers from Boston University and the University of Leicester have published new evidence in Nature which shows Jupiter’s atmosphere may be driven by “wave-heating” from below, after they probed the hotspot directly above its Great Red Spot (GRS).

Scientists have had difficulties in explaining the upper-atmospheric temperatures for over 40 years. The problem has been dubbed the “energy crisis” and has only been solved for areas around the auroral regions.

But for low to mid-latitudes, auroral heating and solar heating from above are not viable options so the researchers decided to look for energy sources below.

Researchers found that a hotspot in the atmosphere directly above the GRS which was much hotter than anywhere else on the planet.

The GRS is the Solar System’s biggest storm, 22,000 km by 12,000 km in longitude and latitude respectively - wide enough to engulf Earth.

The hotspot may be powered by acoustic or gravity waves rising above the giant thunderstorm that has been raging for hundreds of years. The theory is not unimaginable, since a similar process occurs on Earth above the Andes mountain range.

Instead of mountain winds, however, the high temperature in the northern part of the GRS is whipped up by Jupiter’s storm. The turbulent motion of the storm and results in a strain between the storm and surrounding atmosphere. The waves travel upwards and ripple through the atmosphere, depositing energy in the form of heat. 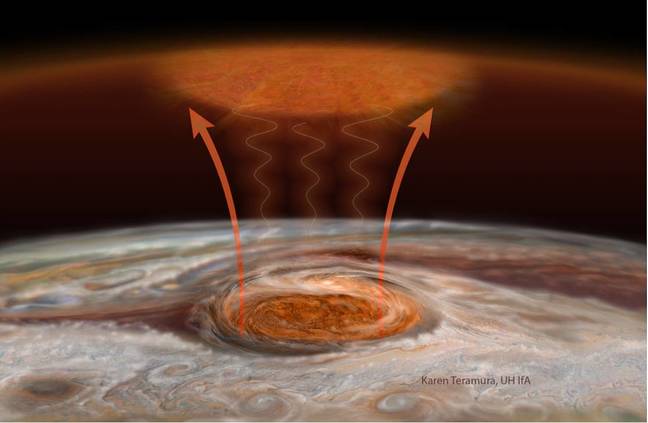 The spike in temperature above the GRS “may then simply be the ‘smoking gun’ that dramatically illustrates this atmospheric coupling process, and provides the clue to solving the giant-planet energy crisis,” the paper said.

The GRS has been steadily shrinking for hundreds of years and it is unknown how that will affect Jupiter's atmosphere, Tom Stallard, co-author of the paper and Reader in Planetary Astronomy at the University of Leicester told The Register.

Understanding Jupiter's atmosphere is important as it could provide more information about Hot Jupiters - a class of exoplanets that are physically similar to the gas giant. Observations of Jupiter provide "another data point of understanding how different types of planets work," Stellard said.

Jupiter’s energetic atmosphere has long been a fascination amongst planetary scientists. Questions about the composition and circulation of its atmosphere hope to be answered by Juno - a spacecraft which has been orbiting the planet since 4 July. ®