Avoiding Liverpool was the aim: All aboard the world's ONLY moving aqueduct

Geek's Guide to Britain There are several fine examples of Victorian engineering still working in Blighty. Tower Bridge in London is one of my personal favourites. I was surprised to discover that another was on my doorstep. Well, 4.34km (2.7 miles) from my doorstep to be more accurate.

The Grade II-listed Barton Swing Aqueduct in Salford was built to solve the knotty problem of how to get the Bridgewater Canal across the proposed Manchester Ship Canal. And bar some routine maintenance, the odd lick of paint and a change of power source from steam to electricity, it has been doing the same job on a daily basis for over 120 years.

What makes the Barton Aqueduct even more interesting is that not only was it the first swing aqueduct to be built but it was also the last. To this day it is unique. And not just in the UK. Scour the globe and you’ll not find another one.

The aqueduct’s origins form part of the story of the Manchester Ship Canal – or the Big Ditch as it was fondly known – which opened in January 1894.

Straightening and dredging the River Irwell to allow sea-going ships to unload in Manchester and thus avoid the punitive charges being imposed by the port of Liverpool had been kicking around for over a century before work started.

A daunting project on many levels, one significant problem had been what to do about the Bridgewater Canal, which crossed the River Irwell at Barton on a stone aqueduct designed and built by James Brindley, the Duke of Bridgwater’s gifted canal engineer. 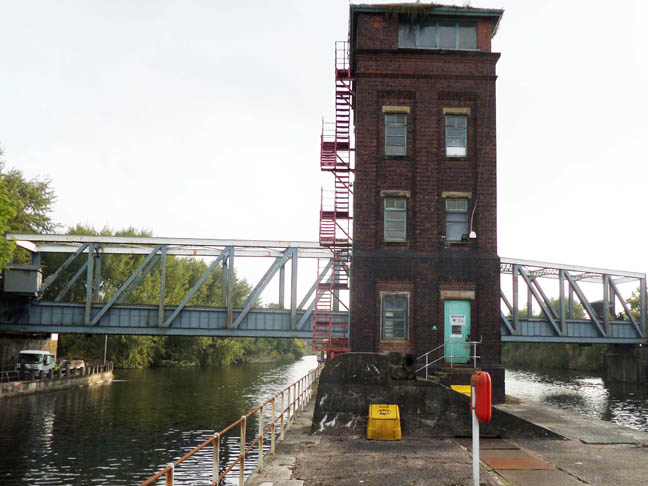 Opened in 1761, the stone aqueduct was a vital link in the north-west’s canal system, so closing it was out of the question. Building a flight of locks to take narrow boats down from the canal level to the Irwell was dismissed too. The speed of the water flow in the Ship Canal on occasion would on make steering a narrowboat across it dicey in the extreme. Brindley himself had dismissed this idea before building his stone aqueduct.

A system of locks and a fixed bridge with enough clearance to allow the size of vessel the Ship Canal could accommodate was a non-starter too.

Luckily the Ship Canal’s ingenious chief engineer, Edward Leader Williams (later Sir), had a plan. The adjoining Barton road bridge was already envisioned as a swing bridge so why not just create a section of canal on a similar pivot and treat it in the same way?

Look at Barton aqueduct today and you see it much as it was when new, the only difference being the removal of the tow-path that once ran above the right hand side of the water trough so horses could pull the barges across.

Measurements, mechanics and how a moving aqueduct actually works

The aqueduct pivot mechanism consists of a 8.2m (27ft) diameter race plate embedded in a series of granite blocks. Sixty-four cast iron taper rollers sit on top of the race plate held in position by a spider ring. On top of that an upper race plate supports the aqueduct and the circular gear ring that connects the hydraulic drive system to the aqueduct superstructure.

Draining the trough before swinging the bridge was originally mooted but was dismissed for two reasons. Firstly due to the time needed to refill the trough and secondly because while the Bridgewater Canal was renowned for the cleanliness of its water - apparently the fishing in it was rather good - the River Irwell was little more than a toilet. Over the previous decades it had developed into a drain for the outflow from the burgeoning industries of Manchester and Salford.

To reduce the pressure of the turning mechanism, a hydraulic press was installed in the pivot. When water was admitted to the press it took up to half the weight. So successful was this system of hydraulic assistance that Leader Williams retrofitted it to several road swing bridges being built over the Ship Canal including the ones at Stockton Heath and Knutsford Road in Warrington. 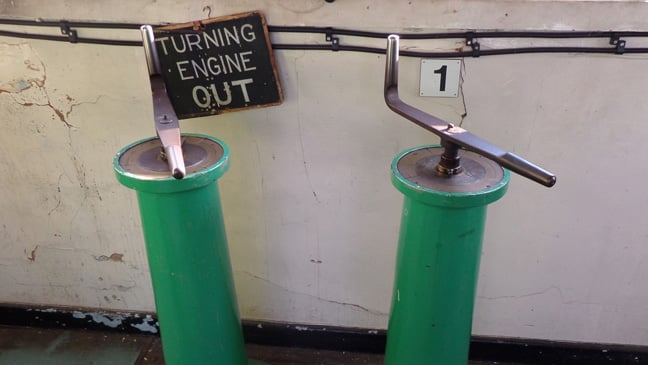 Next page: When hydraulics are suddenly really, really important
Page: