Avoiding Liverpool was the aim: All aboard the world's ONLY moving aqueduct

The weight of the structure meant that the design was pushing the limits of the possible. This became clear when the sixty-four 35.5cm (14 inches) mean diameter hollow cast-iron rollers started to deform. By 1927 the structure had dropped by 8.89cm (3 1/2-inches). In 1928 the iron rollers were replaced with steel and since then the bridge has dropped by only 2.4mm (3 3/32-inch). Once the iron rollers were replaced the hydraulic assistance was dispensed with.

You will find an archive picture of workmen replacing the rollers while the trough was supported on four jacks. The concrete jack supports can still be seen on the island. Messing about in a 0.91m (3ft) high space with 660 tonnes of ironwork above my noggin is not a job I’d fancy.

The hydraulic system was originally charged by steam engines and a water accumulator tower situated on the north (Eccles) bank of the canal but in 1939 electricity took over the job and the system is now powered by two Mather & Platt induction motors.

The steam pumping house and water tower were demolished after the Second World War, the site now covered by the houses of Havenscroft Avenue at the end of which is the modern access gate to the aqueduct and bridge site.

A bit moist, but native Mancs will assume it’s just the weather

Opening and closing the bridge involves exactly the same process as on the day it first opened. Barrier gates that when open lie against the bank of the canal and the side of the aqueduct trough are manually wound shut and the 60cm (2ft) gap between them left to drain.

Next, four hydraulic rams push a 12 tonne U-shaped wedge that sits between the canal and the trough up to create some free space between the two. The U-shaped wedge is tapered in profile and faced with rubber on both sides. When the bridge is closed the wedge drops back down under its own weight to form a watertight seal between canal and the trough. 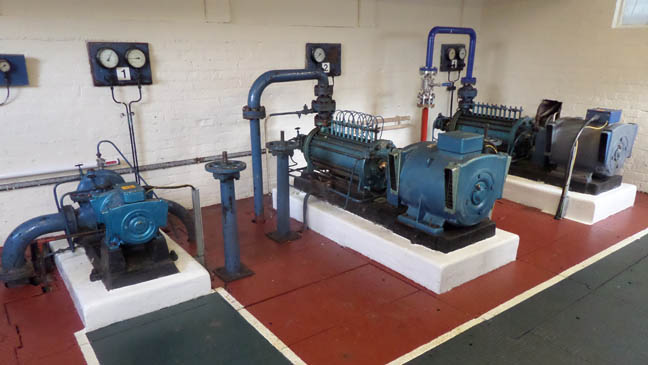 The original steam engines were replaced by electric in 1939. Photo: Alun Taylor

The innovative design of the water seals of the Barton aqueduct certainly owes something to Leader Williams’ time as engineer to the Weaver Navigation and designer of the Anderton Boat Lift. It is remarkable how little leakage there is from the trough gates. Stand underneath them and yes, you’ll get a bit wet, but no more than you would in a light shower. Native Mancunians will assume it’s just the weather.

Many people will tell you that the aqueduct swings through 90 degrees. It doesn't, as even a cursory glance at a map of the site will reveal. While the road bridge crosses the island at a right angle the aqueduct only needs to swing through 73 degrees.

Thanks to the large body of water in the canal, the aqueduct bridge doesn’t suffer from the hot weather stick that can sometime jam the Barton road bridge shut and necessitate a call to the Greater Manchester Fire Service to come and hose down the ends.

The area that immediately surrounds the ends of the aqueduct and the narrow artificial island that houses the bridge, aqueduct pivots and the control tower are not open to the general public. That's no great surprise. The architecture is purely functional, the brickwork a bit shabby, the paint peeling (over the years the bridges have changed colour several times but more recently repainting has taken place only when needed rather than for the sake of aesthetics), the decoration minimal. Functionality is the name of the game.

The island itself has weathered the passing years well despite the not inconsiderable flow of water in the Ship Canal. The regular rooting out of unwanted vegetation aside the Cornish granite stonework has required little in the way of maintenance. Grass now covers much of the island surface at its ends away from the passage of workman's boots.

Some of the woodwork attached to the sides is in need of repair, presumably having been thumped once too often by maintenance barges, but that is ultimately a cosmetic issue and one that merely underscores the fact that this is a working facility not a museum to Great Britain's vanishing industrial past.

Getting past the barriers

Thanks to Peel Ports I did manage to wangle a visit pass. That was one thing. Actual access to the island was another - it’s tricky: you must weave through a narrow gate built into the side of the busy road bridge and down a metal ladder. Once on the island the chances of falling into the Ship Canal are pretty high thanks to only intermittent railing on the island. And there's quite a lot of exposed machinery. Hard hats, work boots and high viz jackets are very much the order of the day.

I'd half-expected the operation of the bridge to be largely an automatic affair. Large buttons with Open and Close on them figured in my imaginings. I could not have been more wrong. Operation is conducted from inside that four-storey piece of stolid-brown brick utilitarian that’s the control valve control tower that spans most of the width of the island.

Climb the creaky wooden stairs of that tower to the top floor of the four-storey block and you find something they looks much like the interior of a Victorian railway junction box. Yes there a PC now but it’s just there to monitor the movement of shipping. It has nothing to do with the operation of the bridge or aqueduct.

By turning a pair of rotating controls - the connectors from which run exposed the full height of the control tower and into the foundations of the island - the operator manually adjusts the hydraulic valves that regulate the water pressure that turns the bridge.

The control levers look every moment their 120-year age, polished by what must amount to hundreds of thousands of actions. Like the aqueduct itself the controls were made to last and the workmanship is evident when you run your hands over the smooth, cold metal.

It’s as much an art as a science not least because it involves a knack of judging the amount of momentum in play. Once hydraulic pressure has got the bridge moving very little additional energy is required to keep it moving. White lines painted on the canal abutment walls provide a simple visual guide for the operators to line the trough up when closed.

It is training and manual procedures rather than technology that prevents the bridge operators from emptying the contents of the trough - or conceivably the entire Bridgewater Canal - into the Ship Canal.

Opening and closing the Barton swing bridges takes about half an hour and happens on average once a day. A far cry from the heyday of the Salford docks when it opened and closed like a toilet door in a dysentery outbreak.

Today the regular traffic consists more of sightseeing ferries running between Salford Quays and Liverpool though there is still some commercial traffic heading to and from Weaste Wharf (cement), the Cargills plant (grain) and Irwell Park Wharf (mostly scrap metal these days).

For obvious reasons the aqueduct bridge is swung open first and closed last - traffic on the Bridgewater Canal is pretty sparse while the road bridge is constantly busy with people travelling to that nearby temple of rampant consumerism, the Trafford Centre.

Strangely narrow boat users apparently sometimes complain at the delay caused by the swinging of the aqueduct. Why anyone would moan about being delayed for thirty minutes by a system that has been in use for more than a century and when they themselves are only travelling at walking pace is beyond me.

Keeping the aqueduct operating is down to the expertise and resourcefulness of the staff at Peel Ports. Most new parts, especially for the electric and hydraulic systems which back to before the Second World War and beyond, have to be handmade. Finding people and companies who can do so is becoming more difficult as the years tick by.

Watching the two bridges swing silently from their open position across the Ship Canal to the closed position in which the two structures come to rest line astern along the island on which they sit is rather impressive and well worth a shufti even if Victorian engineering is not your thing.

The best place to watch the bridge and aqueduct do their dance is from the footbridge over the Bridgewater Canal on the southern, Trafford, side of the swing aqueduct at the end of Chapel Place.

But be warned: it’s not overly welcoming. The area was landscaped with tourists and visitors in mind in the mid 1980s and it is from this time that the brick paving and gazebo date but it is a bit dilapidated today.

In 2006 Salford City Council carried out an appraisal to redevelop the area and create the Barton-Upon-Irwell Conservation Area and apply for World Heritage Site status but that seems to have come to nothing. 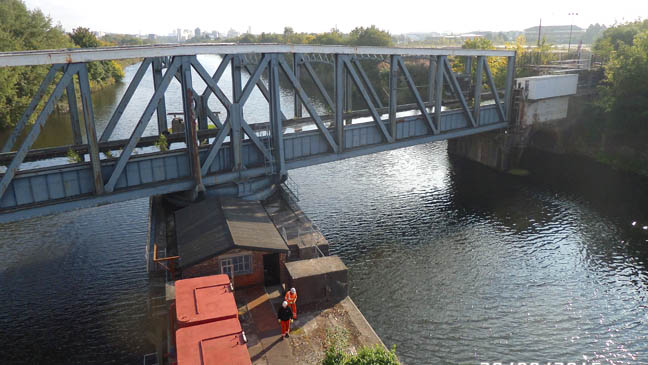 Another area that should offer a good view of both bridges is the open space beside Brindley’s original stone embankment to the north of the ship canal. The abutments of Brindley’s aqueduct survive on the Eccles (north) side of the Ship Canal, the original bridge line being bypassed when the Bridgewater Canal was realigned.

The area was landscaped during the early 1990s but has since become rather neglected, overgrown and uninviting. This area is officially known as the Barton Aqueduct Pocket Park and is now part of a regeneration project led by Salford City Council and funded by the Heritage Lottery Fund so things may improve in the near future.

There is also now also a new, wider heritage conservation area scheme, known as ‘Barton Bridges’, organised by the Peel Group in association with Salford and Trafford Councils with the objective of regenerating the whole area as a visitor attraction encompassing the aqueduct, the road bridge and the nearby Augustus Pugin-designed All Saint’s church.

If you fancy a visit to the Barton aqueduct there are plenty of places nearby to eat and drink.

The Trafford Centre with its huge range of bars and eateries is only a ten minute walk away. It also now boasts a Five Guys burger joint, reason alone to visit if you ask me. Halfway to the Trafford Centre is Table Table, a family pub offering a decent range of nosh. The nearest pub is the Kings Arms, a few seconds stroll away along Barton Lane. Handy if all you fancy is a quick pint. If you want to stay longer, there are several hotels close to the Trafford Centre including two Premier Inns.

The biggest problem in planning a visit is finding out when the aqueduct actually opens and closes. There's no reliable information available, so Peel Ports will be your best bet unless you fancy hanging around until something big chugs along the canal.