Milk IN the teapot: Innovation or abomination?

The readers must decide

El Reg towers was plunged into internal strife today, with the production desk struggling to keep the news production line humming as senior editors were forced to launch an investigation into the question that has split the editorial team down the middle: is it acceptable to add the milk to the tea pot?

The rift opened up at approximately 10.20am here in our London HQ. A member of the team offered to make a pot of tea. Before we knew it, said team member had placed a pot, mugs and sugar on a vacant desk.

The rest of the office savoured the soothing aroma of steeping leaves, wafting across the room on an unexpected gentle breeze as the air conditioning system staged one of its sporadic bursts into life.

Then the bombshell: “Tea’s brewing. The milk’s already in the pot.”

As veteran hacks fell off their chairs clutching their chests and wondering where their tea was, the MD was called in and quizzed as to whether they’d ever heard of such a thing. He hadn't, and immediately ordered a double espresso to calm his nerves.

Meanwhile, the grad trainee quizzed whether milk in the teapot could be the basis for a chain of gourmet milk and tea pop-up street food outlets, and immediately initiated a Kickstarter campaign.

And then the clincher. As these pictures show when the brewing tea-milk-melange was inspected, the “pot” was not a tea pot, but a coffee pot. To make tea. With milk in it.

The justification from the tradition trashing team member? “It’s better than the piss brew you get when people don’t dunk the tea bag properly.” 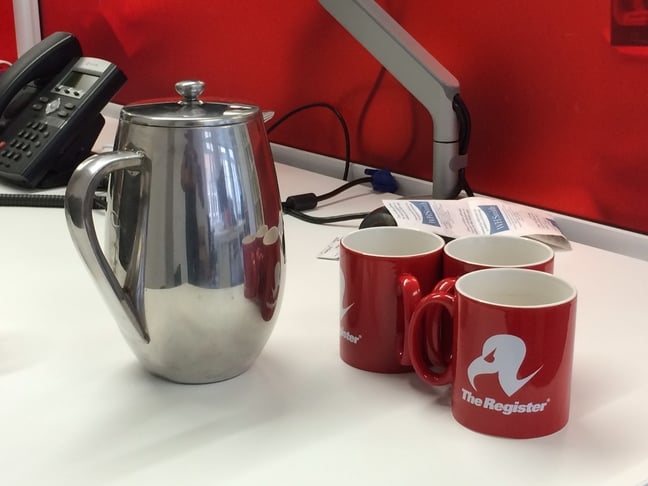 Is this the future? Tea, in a coffee pot, with milk

As voices were raised, teacups smashed, and rich tea biscuits crumbled in confusion, the voices of reason decided there is only one way to solve this potential split. Ask the readers.

So, over to you. Is adding milk to the pot while the tea is brewing a “why-didn’t-I-think-of-that” time saver, or an insult to years of British tea making that will only crush out individuality even more than any barricade of Brussels-based bureaucrats? And is the use of a plunger a flavour booster, or at least as bad as using two teabags to make a faster brew? Responses below please. ®