Compared to the year-ago Q1: 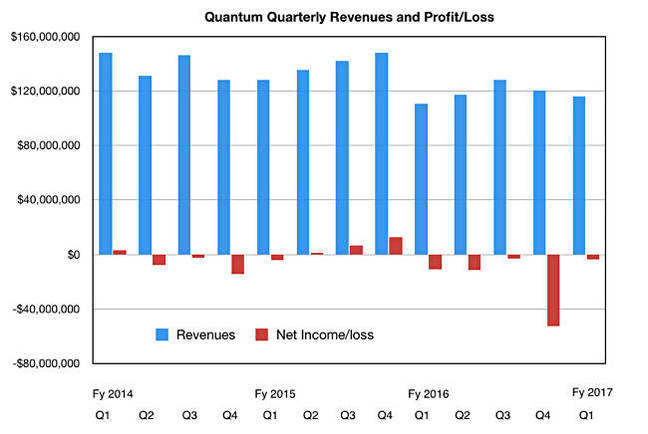 The DXi revenue increase this quarter helped a lot and, against that, the tape revenue and royalty declines were relatively minor. It was also Quantum’s 20th consecutive quarter of year-over-year growth in scale-out storage revenue – now up 11 per cent – and data protection revenue growth – now up six per cent.

President and CEO Jon Gacek said: "In April we announced a large public cloud, scale-out storage win, which we expected to generate $10m in total revenue for the year. That opportunity has since expanded, and we now expect the resulting revenue contributions — which started in the first quarter — to total at least $20 million for the year.

"On the data protection side of our business, we closed a multi-million dollar DXi deduplication deal and capitalized on a more stable tape backup market."

Chief financial officer Fuad Ahmad, referring to refinancing, added: "We are in discussions with a number of financial institutions regarding expanding our credit line to provide sufficient near- and long-term liquidity and to create a clear and executable roadmap to address our convertible notes due November 2017.

"We've received strong indications of interest from two different lending sources, each of which has provided preliminary terms that, if successfully executed in a definitive agreement, not only would provide substantial additional liquidity but also should alleviate any perceived market risks related to the convertible notes."

Next quarter’s outlook is for revenues between $118m and $122m; $120m at the mid-point and a 2.6 per cent increase on the previous second quarter. That's pretty cautious, and Quantum is forecasting either zero profit or a similar loss to this quarter. Not out of the woods yet then, but on its way. ®