Bonus story: The saga of the five-inch 'toothbrush' gun 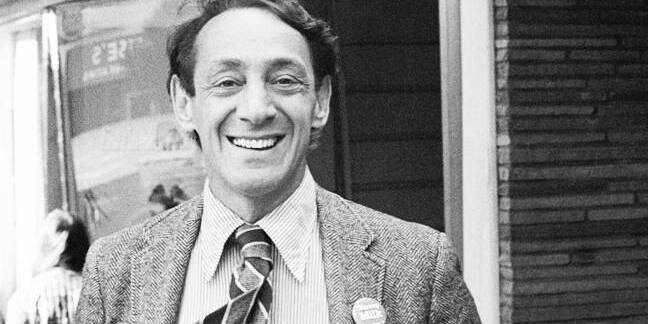 It's been 37 years since The Village People's hit song In the Navy associated the armed service with an acceptance of homosexuality.

It's been 38 since one of the gay movement's trailblazers, Harvey Milk, was gunned down at San Francisco city hall by fellow city supervisor Dan White.

Now the two get to hook up, with the news that the United States Navy will name one of its boats after Milk, who served as a diving officer on a submarine rescue ship during the Korean War and who was wearing his diver's belt buckle when he was killed.

Sadly, it won't be the USS Harvey Milk but rather the USNS, which stands for "United States Naval Ship" and is the designation for non-commissioned ships that are property of the United States Navy.

In this case, Milk's namesake will be a Military Sealift Command fleet oiler, which may sound less romantic than a battleship until you consider that the USNS Harvey Milk will be providing oil to sailors, something he would no doubt have approved of.

The ship will be built in San Diego, which, coincidentally, is where the Village People filmed the video for their number one hit.

The decision to name a ship after Milk stemmed from a resolution passed by the city of San Francisco and pushed by supervisor Scott Wiener back in 2012. It asked the Navy to consider honoring the man who was the first openly gay legislator in California and remains a legendary figure in the city.

The Navy is in part responsible for San Francisco's reputation as a safe haven for homosexuals: when it discharged sailors for being gay, many of them chose to remain in the city rather than go home and face discrimination. The Castro district, where Milk moved to in 1972, became the center of the gay community and a focal point of the new gay rights movement.

Milk himself became active in politics, being voted in largely by Castro residents, thanks to the San Francisco police's aggressive and often violent targeting of gay establishments in the neighborhood. His activism and determined advocacy helped change the way the city treated gay men and became the spark that led many decades later to the legal recognition of gay marriage across the United States and the repeal of the Department of Defense's "Don't Ask, Don't Tell" policy.

That said, the resolution to ask the Navy to name a ship after Milk was not without controversy: critics cited his opposition to the US military's frequent interventions and his strong opposition to the Vietnam War.

A whole new level of idiocy

Despite Milk's famous sense of humor, we have so far failed to throw in sufficient risqué jokes, which seems a waste given the seemingly limitless opportunities to do. So let's fix that with the tale of the five-inch gun.

On the news that the UK Navy was planning to spend £183m on three guns for its ships, newspaper The Daily Star managed to go off half-cocked and achieve a previously unimagined level of idiocy when it complained about the waste of money.

This is amazing. The Star thinks a five-"inch gun is literally five inches long. pic.twitter.com/Uv2BFnlfc3

"We just blew £183m on a five-inch gun, but it's 'good value for taxpayers'," bellowed the headline, before explaining exactly why that was so ludicrous. But it wasn't the Navy that had blown – or sucked – in this case, as the opening paragraph made clear:

The Ministry of Defence have just splashed out on a £183 million contract for a FIVE INCH gun – claiming it's "good value for taxpayers." The weapon – which is the length of a toothbrush – will be placed on combat ships that are still in the factory.

It didn't take long for people – including the UK Defence Journal – to notice that far from being five inches long, the measurement in fact refers to the caliber of the weapon, ie, that the shells coming out of the thing will be five inches in diameter.

We can't be sure, but we are willing to bet Harvey Milk would have laughed his ass off. ®

PS: The Star has since updated its article.

Journalism at its best

Google's clever-clogs are focused on many things, but not this: The Chrome Web Store. Devs complain of rip-offs, scams, wait times

Support? Hello? Is anyone here?

'Size isn't everything, it's how you decorate it'

ESA's Ariel mission will boldly spot exoplanets not seen before

The meter-long telescope expected to launch in 2028