IBM’s DeepFlash 150: Got half a million bucks for a fat, fast JBOF* box?

WHOMP: Half a petabyte

SanDisk claims it can deliver up to two million raw IOPS and support up to eight (SAS) connected servers. There is no traditional storage array controller function with this flash array, it being the flash equivalent of a JBOD.

At launch Ceph and SanDisk’s ION Accelerator software were available for it. Basically the thing needs a server box to provide storage array controller functionality and turn it into a useful system component.

Where'd this pop up from, then?

The resulting IBM system is the DeepFlash 150. It’s appeal is that you can get up to half a petabyte of data in flash and access it, via Spectrum Scale’s parallel access functionality, at blistering speed. IBM says it offers “breakthrough economics with an All Flash array at a disk-like acquisition price for large scale, unstructured data.”

Think less than $2/GB pricing for DeepFlash 150 with Spectrum Scale and less than $1/GB without.

Ironic, as Spectrum Scale has its roots on GPFS which was designed to overcome slow disk array speed by providing parallel IO streams. Now flash solves that problem and Spectrum Scale on the IF150 should be faster than a standard external access file protocol like NFS or SMB. 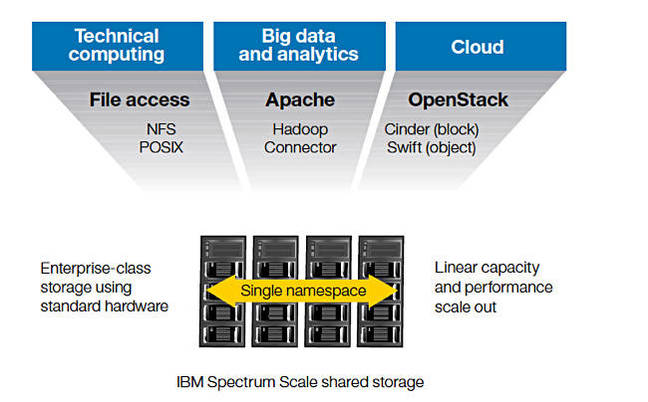 It seems to El Reg that the IF150 is a prime 3D flash upgrade candidate and we should/could see a 1PB capacity or greater in a few months time. IBM talks of the DeepFlash 150 being “a petabyte-scale all-flash array combined with IBM Spectrum Scale for Exabyte-scale big data workloads.” Any use of 3D flash should lead to higher-capacity component cards: think 16 and 24TB, and a lower per-GB cost.

WDC will be well pleased to have Big Blue’s channel punting the DeepFlash 150 box, especially with Pure Storage’s FlashBlade system helping to educate customers about the need for such systems. WDC's other system partners for the Infiniflash box, meaning CloudBytes, Nexenta and Tegile, will be able to point to Big Blue's validation of the hardware and hopefully reap sales benefits from that.

A 512TB DeepFlash 150 with Spectrum Scale could cost around a million dollars, with half a million of that being for the software alone. That should give Nexenta, Tegile and any other software suppliers a lot of pricing headroom for their own IF150-based products.

Get an IBM DeepFlash 150 datasheet here and solution brief here. ®

* Certain storage vendors would have you believe that they coined the backronym JBOF. But no, it was our own Chris Mellor, while writing about Sun's flash efforts back in 2008, in an article titled: "This SSD thing is really catching on".