How many Jubs? What number of chicken's eggs? You demand answers – we give them

The splash story on one Sunday newspaper breezily informed us Brits used six billion fewer plastic bags this year than last, and that these weighed the same as “three million pelicans” – a grave naughtiness committed before El Reg's Standards Soviet.

Last Saturday's edition of the Daily Mail featured the screaming splash headline: “Your plastic bag victory”, loudly trumpeting the reduction in plastic bag use by 85 per cent year-on-year after the government imposed a 5p tax on each new plastic bag.*

But ministerial spokesmen committed a massive blunder by failing to express the weight of the six billion non-existent bags in the correct, approved El Reg units.

Speaking to the paper of reactionary Middle England, ministers variously compared the weight of the bags, which weren't used and therefore quite probably never existed in the first place, to:

This all makes perfect sense to the man on the Clapham omnibus, doesn't it?

Properly translated into El Reg Standards Soviet units, the six billion bags** would weigh 7.857 kiloJubs. As any fule no, one Jub is the standardised unit representing the weight required to crush an Australian beer can at sea level – or, in real world units, 984.6 Russian zolotniks. 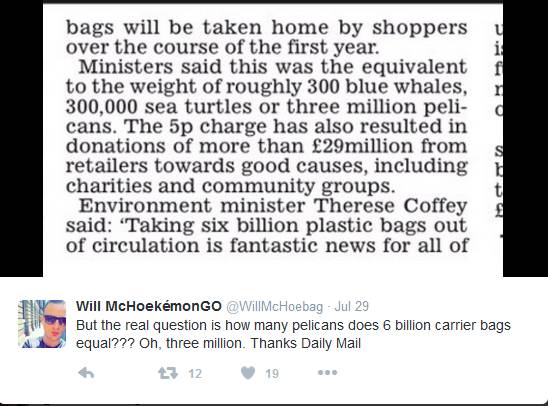 Commentards requiring the means through which to correctly codify the world around us can find the El Reg Standards Soviet's Official Calculator here, with explanation of the units here. 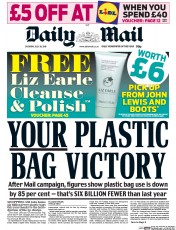 Your average 140-gauge supermarket carrier bag*** (with gusset, natch) occupies a whopping 2.18 regular Reg footballs in volume terms, once opened up. Therefore, if opened up, six billion plastic bags would fill approximately 30,340 Olympic swimming pools, or a measly 22 if you left them packed flat.

As your correspondent's headache begins to take over, the open bag figure, quite appropriately, corresponds to 69 standardised chicken's eggs. Now, who's going to buy six dozen and put that through a real world test? ®

* Sainsbury's still hands out plastic bags but classes them as “long life” bags, which neatly gets around the 5p bag tax; it only applies to single-use bags. They still price them at 5p and pocket the difference for themselves instead of handing it to the ever-greedy taxman. By its own admission, Sainsbury's will exchange your long-life bag for free if it breaks, no matter how old it is. Give it a go.

** Stanford University (for it is they) reckon a standard gusseted placcy bag weighs 5.5 grams.

Reg Standards Bureau How much can you find down the back of your sofa?

Announcing the official Reg-approved measure of social distancing: The Osman

Look on my beanpoleness, ye Blighty, and mea-sure! Far away enough? Check our converter and find out!

Reg Standards Bureau You know this, guys: 7.14 linguine. Get with the programme!

Want to know your height in linguine? Click here

Reg Standards Bureau Well knock us off our unicycles, we had no idea!

Only a bucket of semen remains