Intel has recalled every single one of its Basis Peak smartwatches – as well as urging people to stop using them – because they can become dangerously hot.

Chipzilla has told everyone who bought a Peak to send back the watch along with any and all accessories for a full refund. Keeping it is not an option: by the end of the year, Intel will switch off its Peak cloud services, which the devices synchronize to, rendering the wrist-puters useless.

In June, San Francisco-based Basis Sciences – which Intel bought in 2014 – warned that its Peak smartwatches can cause skin burns and blistering, and hoped to issue a firmware update to correct the problem. It turns out that was impossible without stripping out most or all of its features.

Now the gadgets are being recalled en masse before anyone else suffers from the overheating strap-on. Some people have been hurt, we're told: back in June, 0.2 per cent of the Peak watches sold had burned their owners, according to Intel. That seems low, so cynics may wonder if the chip giant just got bored of running a smartwatch cloud service and pulled the plug, using the overheating problem as a convenient stopping point.

On the other hand, Chipzilla is taking the issue rather seriously.

"We had hoped to update the software on your watch to address the problem. Unfortunately, despite our best efforts, we aren't able to develop such a solution without completely compromising the user experience," Josh Walden, senior veep and general manager of Intel's New Technology Group, said in an email today to Peak owners.

"As a result, we are asking that you return your Basis Peak watch and authorized accessories for a full refund at your earliest convenience."

We are issuing this safety recall of the Basis Peak watch because the watch can overheat, which could result in burns or blisters on the skin surface. It is important that you stop using your watch immediately and return it.

Although we are stopping support for Basis Peak immediately, you can access your data until December 31, 2016. After that date, the Basis Peak services will be turned off. Once we shut down the services, your watch will no longer be able to sync, which will cause it to stop working.

"On behalf of the Basis Science team, I want to personally apologize for this situation," Walden added.

"We know that many of you love using your Basis Peak watches and have made them part of your daily lives, and we are very sorry for the disruption this will cause you."

Judging from the recall's official FAQ, it's game over for the Peak and perhaps even for Basis. There won't be an exchange for newer, safer gear, just a straight-up full refund in cash. You can fetch your fitness exercise logs in .csv format until the end of 2016. After that, who knows? Basis only makes, sorry, made the Peak. It was on sale from August 2014 until June this year, when sales were halted.

An Intel spokesman declined to comment when we asked if Basis was ever going to produce new hardware. Basis has not responded to our request for comment.

The Peak was a pretty normal smartwatch: it told the time, monitored your heart rate and sleeping patterns, measured your skin temperature and perspiration, and counted your steps to track how far you were walking, jogging or running. It synched all that information with your smartphone via Bluetooth, allegedly, and stored its data in the cloud, where owners could view their exercise progress.

What exactly overheated isn't known right now. According to Laurence Bryant, an ARM veep, Intel's Peak was powered by an EFM32 Wonder Gecko microcontroller from Silicon Labs. This chip [PDF] includes a 32-bit ARM Cortex-M4 core running at 48MHz with 32KB of RAM and 256KB of flash. More importantly, it has a bunch of DSP and ADC/DAC hardware for performing precise sensor measurements. There's also a Nordic nRF51822 Bluetooth system-on-chip for low-power wireless comms; this chip includes a Cortex-M0, ARM's slimline microcontroller core.

The Wonder Gecko part runs at 225µA per MHz during normal operation, or 10.8mA, which is tiny so it's unlikely that was getting super hot. Same for the Bluetooth SoC. Perhaps it was the laser-based heart-rate sensor causing all the trouble: Basis claimed the Peak took highly accurate readings, firing its optical sensor 32 times a second, so maybe that pushed the wrist-sized gizmo over the edge. 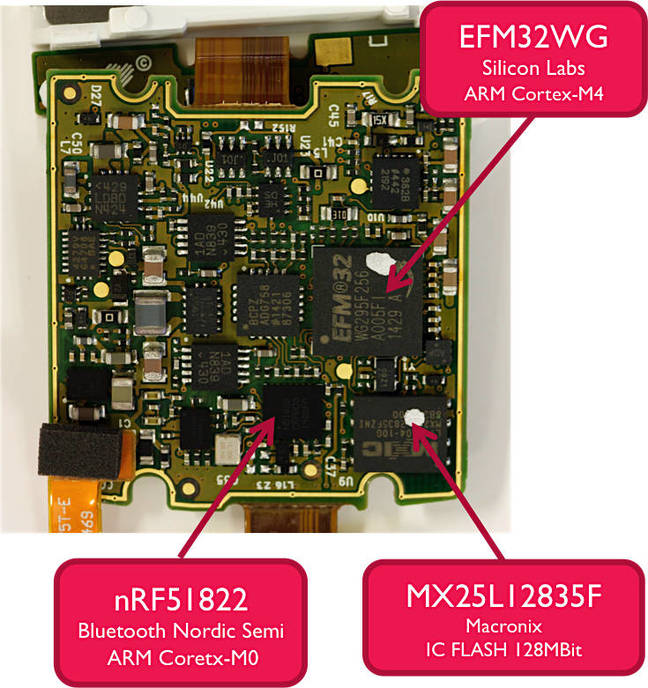 Inside the Basis Peak ... Credit: ARM

The Basis Peak never had much of an audience to begin with. In a smartwatch market where even the top vendors fail to crack a million shipments, the Intel-backed watch failed to gain a foothold. One Reg staffer who managed to get ahold of the Peak reckoned it looked pretty, but the user interface was frustrating at times, and the Bluetooth never synced reliably.

For the record, he was not burned by the Basis Peak. At least not physically. ®