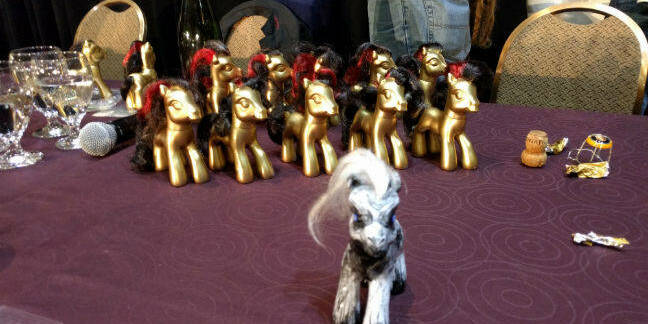 The cheapest, and most highly prized, awards in infosec

Black Hat It’s Black Hat time and that means the Pwnie Awards ceremony, honoring the highlights and bottom feeders of the IT security industry.

The ceremony - which hands out gold and technicolored toy ponies that would make a brony salivate - was held on Wednesday night at the Black Hat convention in Las Vegas. The judges that included Dark Tangent (aka the show’s founder Jeff Moss), HD Moore, car hackers Charlie Miller and Chris Valasek, and Dino Dai Zovi.

The event was standing-room only, a stark comparison to last year’s event, which was sparsely attended. Almost all of the winners didn’t turn up for their prizes, apart from those finding bugs.

In the latter category the best server-side bug find went to David Barksdale, Jordan Gruskovnjak, and Alex Wheeler for the Cisco ASA IKEv1/IKEv2 Fragmentation Heap Buffer Overflow. The best client-side bug went to Fermin Serna for the glibc getaddrinfo stack-based buffer overflow. Both teams had people there to collect their prizes.

But the real fun in the Pwnies comes from taking the piss out of the worst in the industry, and - unsurprisingly – vendors didn’t turn up for those. Western Digital won the lamest vendor response award after dismissing concerns that it encryption keys are trivially easy to hack with a we have “been in a dialogue” with researchers over the issue.

And remember Badlock? The Windows and Samba file server flaw that was supposedly so important the discoverers set up a special website for it? It won the most overhyped bug award by a landslide when it turned out the flaw was more about marketing than actual danger.

In amongst the fun there were heartfelt tributes. Peiter Zatko, aka Mudge, won the lifetime achievement award to warm applause while Google Project Zero researcher Tavis Ormandy won the Pwnie for Epic Achievement for never letting us down.

On the fun side, Katie Moussouris missed out on one award, despite convincing both Microsoft and the US Department of Defence to institute bug bounty programs. But she received her gold pony for Best Song for her performance at KiwiCon. A superb bug hunter certainly, but a singer, well - not so much. ®

Confused why Trump fingered CrowdStrike in that Ukraine call? You're not the only one...