Nexsan-owner Imation's second quarter of 2016 marked its tenth straight quarterly loss. But hey, at least it was the smallest loss of the ten.

Imation said this was due to a strategic decision to shutter the Nexsan product's under-performing regions and exit low-margin portions of the business to focus on the latest UNITY product, the one with added Connected Data file sync and share functionality.

But it gave pretty much the same reasons that it did for the first 2016 quarter's low sales: a decision to shutter under-performing regions, exit low-margin portions of the business, and focus on Unity. So the second-quarter revenue result of this decision is a 1 per cent fall.

And Imation tells us the final Unity product is expected to be ready by the fourth quarter. Hopefully that will spur growth. 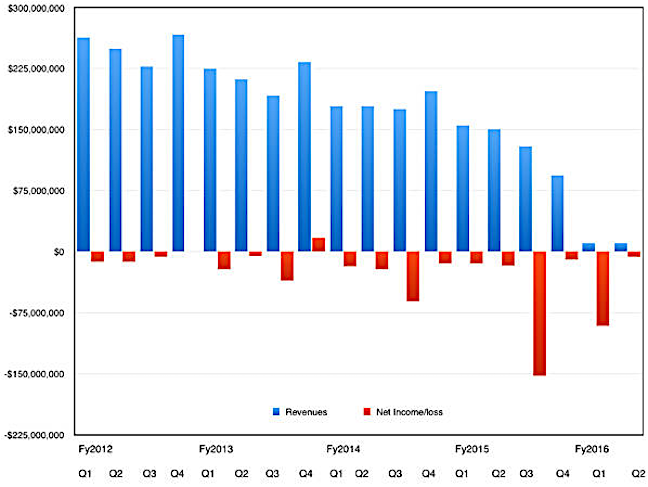 In a statement today alongside its Q2 figures, Minnesota-based Imation said: "The operating loss from continuing operations (excluding special charges) was reduced by $6.3 million to $6.8 million from a loss of $13.1 million in Q2, 2015," meaning, of course, the year-ago quarter.

Research and development spending did increase from $2.9m a year ago to $3.2m.

Interim CEO Robert Fernander said: "Though Q2 revenues were flat compared to the prior quarter, we are delighted with our progress in reducing the operating loss, a significant milestone towards achieving a cash flow break-even at Nexsan."

Since the Clinton Group took over Imation in August last year, revenues have continued to plunge from $94m in the final 2015 quarter. But Fernander is looking forward to growth: "Gross margin improvements, the UNITY product introduction, and a transformation of our go-to-market architecture support our transition from stabilization to growth." When, oh Lord, when?

In the second quarter, Imation's newly formed asset management subsidiary received approval from the SEC as a registered investment advisor. ®

Imation says its Q2 2016 revenues of $10.6m were 37 per cent less than a year ago. Rough math would say the year-ago revenues were then $16.83m. However Imation revenues as reported in Q2 2015 were $150.6m which is shown on our chart. What's going on? We understand Imation is comparing this quarter's revenues, which are based on Nexsan storage array sales, with the year-ago sales of Nexsan storage products only, and not the entirety of Imation's reported revenues that quarter.

The Nexsan revenues would have been included in that $29m number. They were not specifically broken out in Imation's reporting at the time, but have now been revealed in retrospect.