Israeli startup E8 has launched its rack-scale NVMe over Fabrics E8-D24 array at the Flash Memory Summit, saying it has the storage array Holy Grail, setting up a direct competition with EMC’s DSSD product.

The Holy Grail is a trifecta of high performance, low cost, and high availability. E8 says its customers get to overcome chronic storage-industry compromises.

IDC's research director for storage, Eric Burgener, talks of it completely changing the infrastructure density and cost equations. IT delivers “throughput and latency on par with hyper-converged offerings while bringing to bear all the efficiency benefits of shared, disaggregated storage.”

Some speeds and feeds, courtesy of E8's marketing material:

We think the 70TB and 140TB numbers represent usable capacity. 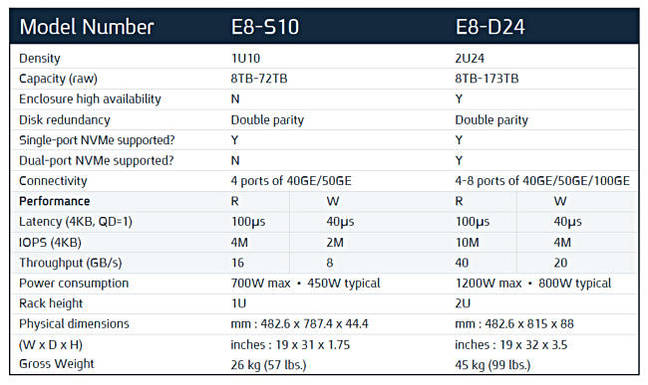 A table from an E8 product brief shows two array products; the S10 and the D24. The D24 has 24 drives with a maximum of 173TB raw capacity, meaning 7.2TB SSDs are being used. The 72TB S10 would also use 7.2TB drives, ten of them. This doesn’t immediately square with the “70TB available now and 140TB next year” message.

E8 says the array provides up to 88 per cent capacity utilisation of the NVMe SSDs inside it.

The company says its D24 array provides 10 times the performance of other all-flash arrays, and features fast random-access latency that guarantees consistent application availability and overall response times without any need for caching. Specifically, it says that it is the highest performing storage appliance based on commodity hardware ever to hit the market.

So the D5 and D24 are in the same general performance area for IOPS and latency but the DSSD box has up to 100GB/sec throughput while E8’s D24 tops out at 40GB/sec.

Apeiron’s ADS1000, an NVMe SSD-using but hardware-assisted Ethernet fabric-linked array, delivers a claimed less than 100µs latency, up to 17.8 million IOPS and up to 152TB of raw capacity.

Mangstor’s 2U NX6320 offers up to 32TB of flash, 110µs read latency and 30µs write latency, up to 12/9GB/sec read/write sequential bandwidth and up to three million IOPS.

EMC is raising channel and customer awareness of its DSSD D5 capabilities as fast as it can. E8 now has to get its marketing and channel spears pointed in the right direction and used forcefully enough to raise its profile and build on its beta tests to establish a beach head in the market.

Apeiron, DSSD, E8 and Mangstor are leading the charge with NVMe flash arrays that have no network access latency penalty. Excelereo and Pavilion Data Systems are two startups following them, and Kaminario and Tegile are two established players with NVMeF technology on their roadmaps. This is, we think, how all high-performance external arrays will be accessed in the future.

The E8-D24 will be generally available in the fourth quarter of this year. ®