+Comment Out of the blue Toshiba has launched an Atom-powered real-time, scale-out, compute-plus-flash analytics engine that is set to compete with Pure’s FlashBlade product.

This announcement unveils the first real competition for Pure Storage's Big Data analytics box and comes from a most unlikely and surprising source, Toshiba not being known at all for enterprise, data centre-class complete systems.

In canned quotery, Ralph Schmitt, Executive of System Development at Toshiba America Electronic Components, Inc, stated: “Big data processing can face multiple problems in scaling, latency and power as the customer demands increase. Flashmatrix addresses each of those issues to create a system that is a true solution for analytic processing by offering low-power-consumption, parallel processing to reduce system latency, card level scaling and a large non-volatile memory space shared by all CPUs.”

A node is a 2U box containing:

Toshiba is not saying if this is 3D TLC NAND.

The CPUs are logically connected at the edge of a mesh, a 2D torus network, with the NAND drives inside the mesh. Each processor can see all of the flash drives. 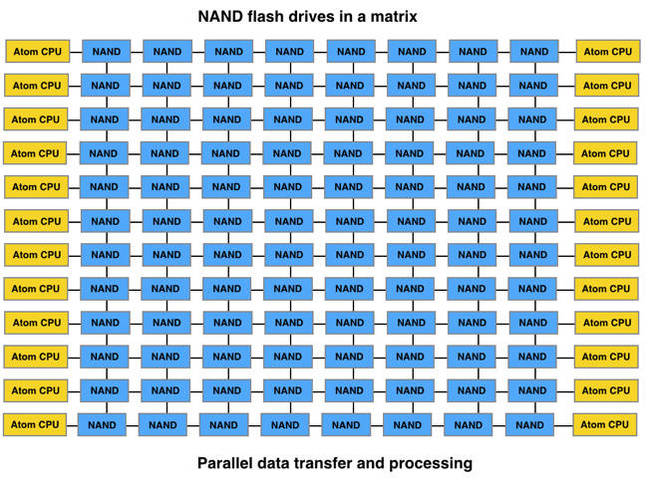 Seen from above, each node has a set of 48 non-volatile memory drives at the front. The set has two rows of 12 cards, one behind the other, each side of a central front-back row of components.

Behind these flash drives are two groups of 6 Micro Server cards, each group being either side of the central component row. The 24 x 1GbitE ports are at the rear of the box.

Thus each node contains two units, each with 12 CPUs (the CUs) and 24 flash cards (the NMs) with 12TB of flash.

There can be up to 14 nodes with linear scalability.

Toshiba claims Flashmatrix needs one-fifth of the power of an equivalent traditional IT system using X86 processors and disk drives and, of course, everything sits in 2U boxes instead of racks, saving lots of space. The traditional system design has multiple servers in a shared-nothing layout while Flashmatrix has a shared-everything design.

Pure Storage’s FlashBlade is a another system designed for real-time big data analytics. That uses integrated Xeon processors with flash storage and PCIe connectivity on integrated server/storage/networking blades, with up to 15 blades in a 4U box.

WD’s Infiniflash is a flash storage array for big data storage and that requires an added server and software to turn it into a system, with various partners such as IBM, Nexenta and Tergile offering products based on it. We would expect FlashBlade and FlashMatrix to outperform such systems.

Toshiba will have fun establishing a channel to sell such systems, it having either HDD/NAND component channel partners on the one hand and laptop resellers on the other. Channel partners will need big data analytics expertise. Perhaps Toshiba is thinking of OEM-like or reseller deals with existing system suppliers. It's all a mystery for now.

We have no pricing or availability information.

You can see FlashMatrix information at Toshiba’s booth (407) at the Flash Memory Summit in Santa Clara, August 10-11. ®