Nimble shows that its all-flashers start small – and grow bigger

Nimble Storage has a new generation of hybrid Adaptive Flash arrays – the CS Thousand Series – plus a new all-flash array entry-point, the AF1000.

The all-flash AF series was announced earlier this year, and Nimble has now added a cheaper AF1000 entry-level system.

If you buy this, you can scale up and also out through the range to larger and faster systems – over 1.2 million IOPS and 8PB, according to Nimble.

Nimble says arrays of any type can be clustered and managed as a single entity in a Unified Flash Fabric.

You can see an Adaptive Flash array data sheet, here [PDF]. Essentially, the AF1000 has a lower capacity and performance level than the original AF3000 entry product.

Nimble says the new Adaptive Flash or CS Thousand Series [datasheet PDF] delivers up to twice the performance of the previous generation with a 40 per cent lower cost of capacity.

The 4U enclosure has 21 HDD slots and three dual-carrier SSD slots, meaning up to six SSDS can be used, with the starting point being three. The system supports 10TB disk drives. 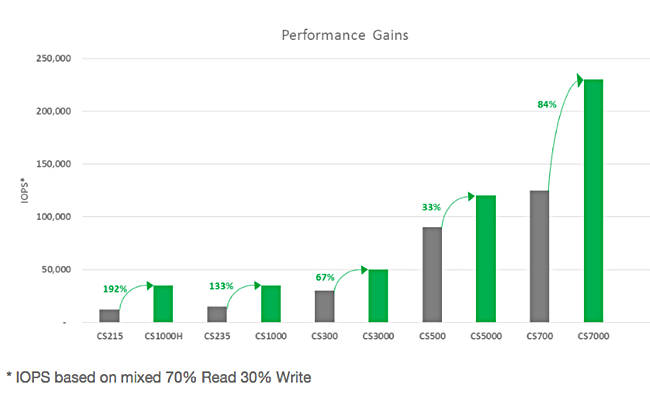 The CS series run the NimbleOS, as do the all-flash products, and feature the following: