Seagate's flash advice: Don't buy the foundry when you can get the chips for cheap

... or something like that. Spend it on essential IP

Let's have a waltz around the Seagate flash dance floor to explore these four areas.

The foundry independence point confirms that Seagate has no interest in integrating a foundry-level, NAND chip-making business into its existing operation. As has been pointed out many times before, this vertically integrated disk drive manufacturer sees no benefit to it of becoming a vertically integrated flash drive supplier.

Its number-crunchers must have pushed numbers through their spreadsheets to explore the financial implications and, we presume, concluded that Seagate can make more money by deploying its capital and credit resources in building disk drives rather than by siphoning some off into setting up a vertically integrated NAND business by, for example, buying SK- Hynix, or partnering Intel/Micron or Samsung.

It will buy NAND chips on the open market or via supply deals with flash fabbers such as Micron, with whom it has a relationship. A partnership with Toshiba is ruled out because WD got there first by buying Toshiba’s foundry partner, SanDisk. 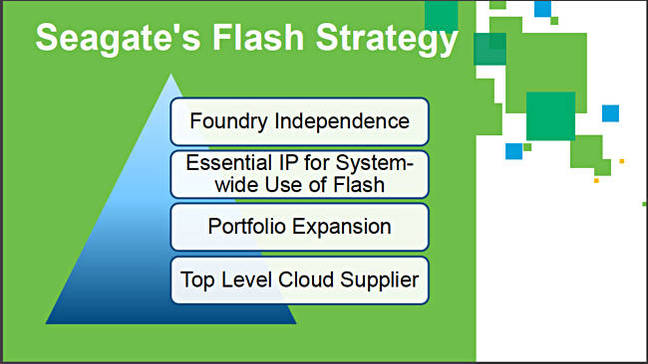 We assume here that Seagate’s flash strategy is actually its general non-volatile memory strategy and includes post-flash technologies such as XPoint in its scope.

Pillar two is gaining essential IP for the system-wide use of flash. This is interesting. Let’s see what it might mean. Flash can be deployed in servers in:

Flash use in storage array controllers is pretty much the same as its use in servers, so we’ll ignore that.

Providing proprietary memory card designs to individual OEMs doesn’t seem like a viable business for Seagate so we’ll forget that, which leaves us with five areas of system-wide use.

It does not produce NVDIMM-F flash, and that might be an area where it could provide expertise, if it has something both Netlist and Diablo don't have. But Micron might prefer to go straight to QuantX (XPoint) NVDIMM-F products from its existing battery-backed NVDIMM-N products rather than devise its version of Diablo/Netlist NVDIMM-F technology.

This is a hotly contested area, the sweet spot of the SSD industry, with mature products using SATA, SAS and NVMe interfaces and getting regularly refreshed as as planar NAND shrinks and 3D NAND adds layers.

The general use of flash in disk bay slots as pseudo-disk using SATA, SAS or NVMe is standard stuff but Seagate has its ClusterStor and DotHill storage array business and has just demonstrated 60TB SSDs in the 3.5-inch disk bay format.

The management of such arrays to minimise wear and provide consistent QoS could provide an IP opportunity to Seagate.

SSD controller provision is another matter. Seagate has disk drive controller IP, some of whose aspects it might be able to re-use with NAND.

The ClusterStor and DotHill arrays might get NVMe over fabrics-class interconnects added to them to radically lower network access latency, particularly any forthcoming flash versions of those arrays.

The operation of Lustre software on all-flash arrays is another area where someone could add IP value, although that is an open source area.

The wild card here us Seagate's Kinetic disk business, the development of direct, Ethernet-accessed drives implementing an object storage scheme. Could a Kinetic SSD concept make sense? (That would get rid of object storage's reputation for slow speed.)

Seagate has been the main proponent of using flash as a disk drive cache and so speeding access. This can be expected to continue.

Before and over the course of the Flash Memory Summit Seagate announced;

It already had SAS SSDs and Flash Accelerator cards. Conceivably it's missing NVDIMM format drives and should, we expect, get access to Micron QuantX chips and start developing XPoint-based drives as go-faster follow-ons to SATA, SAS, and NVMe SSDs in their varying formats, where it makes sense.

This is something WD doesn't have, SanDisk's ReRAM technology not being ready to productise yet.

We don't see Seagate adding storage-class memory system software IP, it not having any expertise in that area. This is deep OS internals work.

Seagate markets its wares to private, hybrid and public cloud service providers. We can surely expect it to use its existing programs to pump flash products to its existing cloud storage customers and new ones.

That's fine and dandy, but doesn't seem to have scope for anything that significant in itself. Instead cloud sales/marketing programmes will be used as channel-like activities to prime demand for Seagate's products.

We're left with these stand-out possibilities for Seagate product development:

For Micron, the prospect of having Seagate as a a QuantX product development and selling partner must look great. From Seagate's point of view it gets product technology that no other flash product vendor can (yet) supply and that's a good position to be in from the growth point of view – XPoint marks the sweet spot. ®