Ten-trillionths of your suntan comes from intergalactic photons

But fear not – our galaxy has in-built SPF protection

Astronomers led by the International Centre for Radio Astronomy Research (ICRAR) in Australia have calculated that ten trillionths of your suntan comes from beyond our local galaxy.

Professor Simon Driver, lead author of the research, published today in The Astrophysical Journal, said that each square metre of the Earth is bombarded by ten billion photons from intergalactic space every second.

That’s a tiny fraction considering one sextillion (1021) photons pour into each square metre of the Earth every second, with the majority of them having been emitted from the Sun. 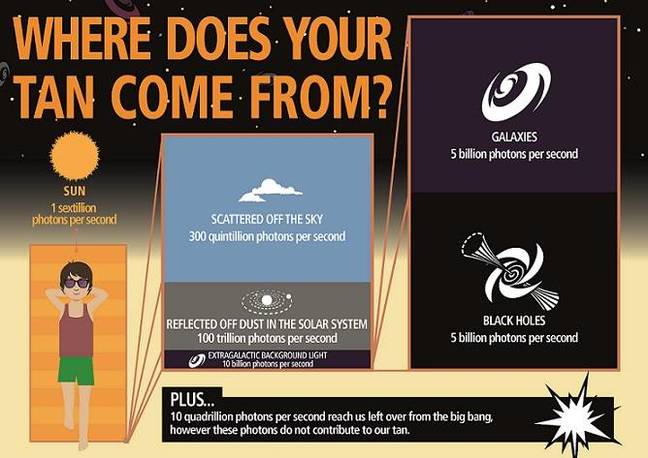 "Most of the photons of light hitting us originate from the Sun, whether directly, scattered by the sky, or reflected off dust in the Solar System. However, we're also bathed in radiation from beyond our galaxy, called the extra-galactic background light. These photons are minted in the cores of stars in distant galaxies, and from matter as it spirals into supermassive black holes," Driver explained.

But don’t worry, although energetic intergalactic photons - at micron wavelengths - can be damaging, you'll need to bathe in the warmth for trillions of years before they inflict long lasting damage. Solar photons are more dangerous as they make up a larger proportion.

Half of the ultraviolet photons coming from other galaxies are also made less harmful as they bump into the dust grains, losing energy in the process.

Professor Rogier Windhorst, co-author of the paper and researcher at Arizona State University, said the galaxies themselves provided an “SPF of about two”.

The study is part of ICRAR’s aim to understand exactly how atoms in the early universe clumped together to form molecules and eventually whole galaxies. ®