A physicist claims to have created a sonic black hole to observe Hawking radiation and its quantum weirdness, all within the safe confines of his laboratory.

The gravitational pull of a black hole was once assumed to be so strong that no object or light could escape once it was dragged beyond the event horizon, making it invisible. But in 1974, Stephen Hawking and Jacob Bekenstein dispelled that idea, and said black holes weren’t entirely black, they emitted energy – and that in fact, this caused them to shrink.

The energy was in the form of electromagnetic radiation - later known as Hawking radiation - and has never been observed in space. The radiation doesn’t come from the black hole itself, and has been interpreted as the creation of a particle-antiparticle pair; one falls inside the black hole and the other escapes.

So, in order to study the quantum nature of Hawking radiation, Jeff Steinhauer, a researcher at the Technion-Israel of Technology, turned to using a Bose Einstein condensate - a type of superfluid - instead.

To recreate the effects of an event horizon, Steinhauer used a laser to trap atoms in place on one side of the condensate and a second laser to create a step potential on the other side.

The speed of flow in the superfluid mimics the gravitational pull of black holes. Phonons - particles of vibrational energy that can be thought of as sound - trying to fight against the grain of the flow and escape are analogous to Hawking radiation photons trying to break free from an astrophysical black hole.

Phonons equidistant from the event horizon were correlated and had equal and opposite energy, Steinhauer explained.

Hawking radiation is a quantum fluctuation - a random change where particles are created out of nothing. It doesn’t violate the principle of physics, however, as the total energy balances out to zero.

“Imagine the sound waves in Doppler shift. If you are travelling in the same direction as a moving sound wave but faster, it looks like the sound wave is going backwards - that can be interpreted as negative frequency and energy,” Steinhauer told The Register.

“The entanglement verifies the quantum nature of the Hawking radiation,” the paper said. The next step, Steinhauer hopes, is to use artificial black holes to tackle larger problems like the information paradox or maybe even quantum gravity. 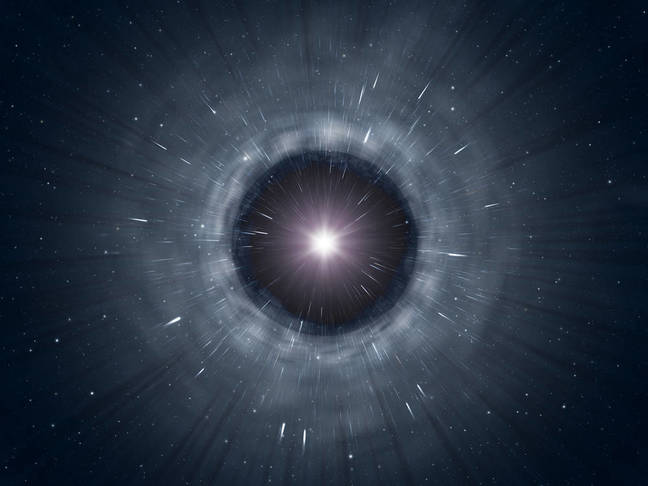 But, not everybody is convinced.

How close is an analogue black hole to the real thing?

It’s not the first time that Steinhauer has used a laboratory analogue to investigate Hawking radiation. In 2014, he published a paper – also in Nature Physics – that used a Bose Einstein condensate to reproduce “self-amplifying Hawking radiation” without the entanglement.

There were doubts about if using analogue black holes could result in a deeper understanding of problems such as uniting quantum mechanics to gravity. And these doubts remain.

Silke Weinfurtner, a researcher from the University of Nottingham also working with black hole analogues, believes that Hawking radiation can be produced experimentally, but is unsure if it could be used to study the information paradox.

A Bose Einstein condensate is a good medium to look for Hawking radiation, she told The Register.

It’s so cold that you can’t really get an accurate reading of the temperature, Steinhauer told The Register. “Temperature is measured as the energy of atoms flying out, but when it’s this cold the atoms don’t move. It’s only the phonons - or sound waves - which cause the temperature.”

He can only estimate that the superfluid is only a tiny smidgen above absolute zero (0 kelvin) - the coldest possible temperature.

To see the effects of quantum entanglement predicted in Hawking radiation in the superfluid, it must be cooled below 2.7 nanokelvin.

Weinfurtner says: “It’s a nice and promising experiment - a good step forward. But it leaves some room for doubt and needs more experiments to confirm if the Hawking radiation here is really from a quantum effect.

“I’m not sure if it can be used to study the information paradox as real black holes evaporate and have entropy, but analogue ones don’t. It’s these differences that matter,” she told The Register.

Ulf Leonhardt, a physics professor at the Weizmann Institute of Science, Israel, who is interested in using lasers to reproduce Hawking radiation, agrees. Whilst the research is a "pioneering paper", the data is "contradictory and sketchy", he told The Register. ®