WD: Resistance is not futile

Analysis WD, with its acquired SanDisk operation, is squaring up to Intel and Micron’s XPoint with ReRAM - Resistive RAM technology.

Back in October last year, the then independent SanDisk joined forces with HPE to fight XPoint. The two signed an agreement to develop Storage-Class Memory (SCM*), a non-volatile storage medium with DRAM-class access speed, which meant faster data access than NAND. The two said at the time that their SCM was “expected to be up to 1,000 times faster than flash storage and offer up to 1,000 times more endurance than flash storage.”

HP would contribute its Memristor tech, with SanDisk bring ReRAM tech. Once WD acquired SanDisk, we waited to see if ReRAM would remain its anti-XPoint weapon of choice. Also, back in 2014, WD’s HGST business, when it was independent, demonstrated a Phase-Change Memory (PCM) device with a 1.5 microsecs read latency. So that is another XPoint contender candidate possibility.

A presentation at last week’s Flash Memory summit by Siva Sivaram, EVP for Memory Technology at Western Digital Corporation, revealed that WD would focus on 3D RERAM for its XPoint fight. ReRAM is preferable to PCM as its DRAM-NAND gap-filler.

Anandtech has made Sivaram’s slides available, and much can be gleaned from them. SCM functions as fast storage this year, as a DRAM extension in 2017, and begins to replace DRAM in 2018-2019, becoming universal memory around 2020. 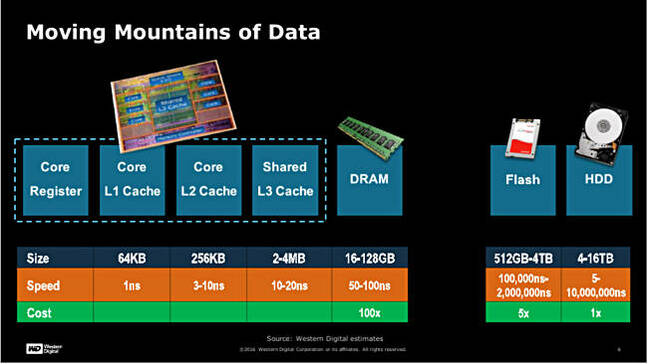 Sivaram discussed expected development in the ReRAM-DRAM cost relationship area, with a slide saying DRAM was twice the cost of ReRAM now and would move to being 20 times as expensive in 2023 as ReRAM technology improved and production became more efficient. He said WD’s ReRAM would be layered, like 3D NAND and also XPoint.

SanDisk was working on a 2-layer, 32Gbit, 24nm, cross-point RERAM die in 2013, cross-point referring to the die architecture** and not Intel/Micron’x XPoint material, which also, of course, has a crosspoint architecture but does not use a Resistive RAM technology. It uses an unrevealed bulk change mechanism based on chalcogenide glass. the same medium as used by PCM. Intel and Micron say their XPoint is not PCM technology.

He said that, because of ReRAM’s latency, endurance, cost, 3D scalability, scale and capital efficiency, and ecosystem support, ReRAM is Western Digital’s choice for SCM. It could be deployed in rack-scale designs with server nodes accessing shared and pooled SCM, composable infrastructure with separate pools of CPUs and storage and even in smartphones – they are looking quite far out.

We have no details of ReRAM performance in detailed IOPS and throughput terms, no device specifications and no time-lined roadmaps have been revealed; the technology is not that close to productisation. WD will bring its 3D NAND manufacturing skills to RERAM chip fabbing, with a ReRAM die having multiple layers of crosspoint cells. 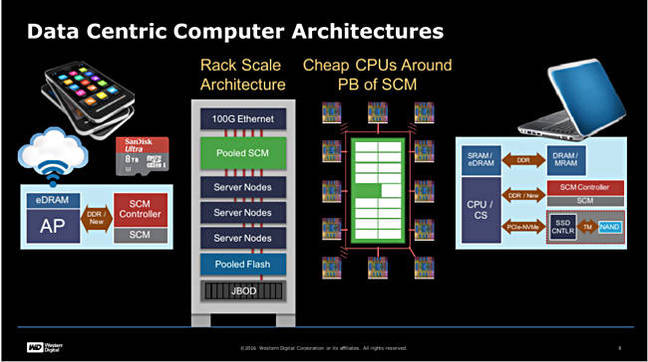 When will we see product? Perhaps something will be revealed at the 2017 Flash Memory Summit. Perhaps it will take longer still. ®

** Crossbar is a ReRAM startup with a crosspoint architecture; its cell selector feature allows thousands of Crossbar’s ReRAM cells to be inter-connected in cross-point memory arrays. It is looking to license its technology to fab operators and has a partnership with China’s SMIC for ReRAM development and production using SMIC's 40nm process.