Hyper-converged top-of-the-pops list is out: Guess who hasn't crushed it?

Surprise, surprise: EMC is not top of the hyper-converged charts … yet.

The report describes HCI like this: “The next wave of integrated systems, beyond the base level of converged hardware integration, is hyper-convergence, which installs a software-defined storage layer optimised for VM-aware operation on top of an integrated hardware and system software stack.”

A hyper-converged system should have:

Forestier’s analysts evaluated HCI suppliers against 28 criteria, which formed three categories; current offering, strategy, and market presence. Vendors had to have an available product, reference-able customers, an ability to demo the product, and an offering that has drawn significant interest from Forrester clients.

This filtering produced a dozen suppliers from the total number out there. 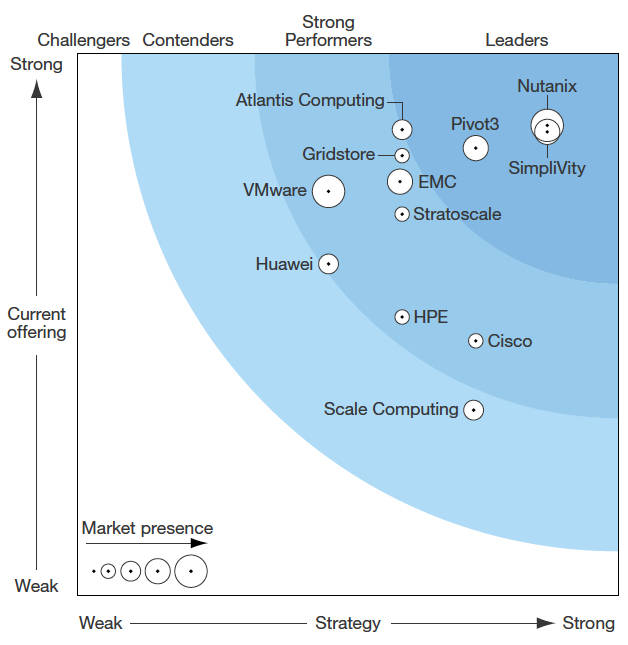 Nutanix is top in the leaders quarter circle, no surprise, with SimpliVity an exceedingly close second – oh, it is doing that well? – and Pivot3 third. Now that is a surprise.

The strong performers include Atlantis, GridStore (now HyperGrid), EMC, VMware, Stratoscale. Huawei, HPE and Cisco, with Scale Computing as the sole challenger and no supplier in the outer, contenders’ quarter circle at all.

How come Pivot3 is scored so high? Its market presence is good – over 2,000 and “boasts one of the two largest hyper-converged data storage clusters we found in our research”. Forrester notes: “Because it has not focused on general enterprise environments, it’s been flying under the radar for some time. In the past 18 months, the company has made a concerted effort to sell outside of its historical strongholds, and in its most recent quarter, it reported that, for the first time, non-surveillance applications accounted for the majority of its sales.”

It concludes “Pivot3 is a strong candidate, especially if requirements include PB-scale data storage, where its space-efficient data protection may reduce costs.”

Some of points Forrester notes about the strong contenders’ group of suppliers are these:

Scale Computing is summed up thus: “a small company but has a large installed base in relation to its revenues.”

Hyper-converged is one of the on-premises storage market hotspots; it has lots of growth potential. Expect lots of strong competition as vendors try to grab and hold market share.

Get a complimentary copy of the Wave HCI Q3 2016 report here (registration required) courtesy of SimpliVity. ®