Plus other developer kits: Joule and Euclid

IDF16 Intel has a bunch of new and updated hardware kits for engineers to toy with and use to build prototypes – from a DIY drone kit to a bunch of beefy Internet of Things packages.

The most interesting is the Aero drone-building kit, available now to order. You use this single-board computer as the control electronics in a quadcopter: it does everything from the decision-making logic and processing of incoming remote control signals to driving the IO lines to the drone's propellers.

The FPGA is user-programmable; you can configure it as you wish to send signals to the motor controllers on each propeller, and to send and receive signals from onboard sensors and peripherals. The board also sports a MIPI CSI-2 camera interface and a USB3 connector to an Intel RealSense motion-detector cam, if fitted. 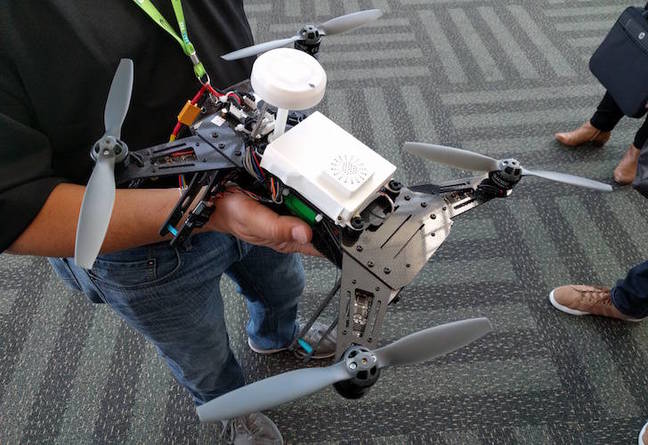 Drone kit ... A complete Aero 'copter – the board is in the white box in the middle

The Aero runs Yocto GNU/Linux. The idea is, you come up with a project – like a smog-detecting drone or a delivery-dropping quadcopter – and then take an Aero board, wire the necessary peripherals and sensors to it, and then attach it all to a drone skeleton. All you need is a frame with motors, propellers and motor controllers; the Altera FPGA on the board sends the necessary signals to the controllers and other gizmos.

The board is the size of a playing card: 88mm by 63mm by 20mm, including the heatsink. Yes, it needs a heatsink. When we chatted to Intel staff about the kit, we were told the battery life numbers hadn't been finalized yet – how long one of these can fly between charges depends on the size of the battery and the weight of the drone. The board weighs 60g with a heatsink. Its 64-bit x86 Atom processor has a typical power draw of 2W.

Right now, you can order one of these for just shy of 400 bucks, and a full kit including the drone frame will be available in the final quarter of 2016. That ready-to-fly build comes with libraries to access the RealSense camera and control the gizmo's flight, and an AirMap development kit so you don't knowingly fly into restricted airspace.

In other Intel development kit news