Beardy Ed Vaizey: 'I can't let go. I like the tech sector'

Wants to see a department for digital. Good luck with that 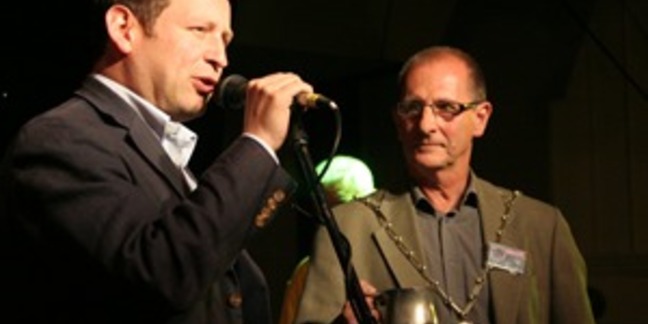 Interview One month after Theresa May swept into government, former culture and digital minister Ed Vaizey is relatively sanguine about getting the sack.

"The reason for me not being in my job is due to political reasons ... I didn't have perhaps enough credentials for her [sic] to stay in my post or even stay in government. Others did, but such is life."

Vaizey has been close friends with former prime minister David Cameron since the pair went to Oxford, so it's easy to see why his face might not have fitted in the new order. "But I said to her when she was letting me go that I would be very glad to support her from the back benches."

Since then he's grown a beard and moved to a better office in Portcullis House, where we meet in the atrium. Unlike the new prime minister, who only created a Twitter account in June this year, Vaizey is a prolific tweeter.

Ten minutes into our chat he calls over George Freeman MP for Mid-Norfolk and asks me to take a picture of them both. "George... George... George," he yells and waves excitedly before finally getting his attention. "This is the new head of policy for Theresa May. See, we all grow beards."

After taking the photo he immediately posts: "Hunting for @michaelgove beard, found @Freeman_George instead."

Nevertheless, Vaizey remains enthusiastic about his former brief. "I want to stay in the sector. I do a weekly newsletter and some people have said, God it's really sad that Ed Vaizey can't let go. Well I can't let go. I like the tech sector. I will represent my constituents in their issues as a backbench MP, but in terms of what is the national policy I want to talk about in Parliament, it's going to be tech and culture."

Of the new culture secretary Matt Hancock, he says: "Matt has made it clear that he is the kind of guy that will welcome the sharing economy and has a view that it's better to update regulation rather than shoehorn in something new. We will want a friendly regime."

What about issues of workers' rights in light of the recent Deliveroo and Uber protests?

"People tend to say, and I'm guilty of it myself, that regulation is a bad thing and light regulation is a good thing. And of course it is a spectrum. There are some opportunities to regulate which can actually help business.

"The Deliveroo example is a good one, where you can say these companies have created a new working environment which perhaps sits between self-employed and being fully employed by a company. Therefore, there is an opportunity for government to say: is there a third way?"

New legislation that provides some rights and protections specifically for sharing economy workers could be the answer, he says.

Vaizey's regulatory approach toward BT's infrastructure division unit can comfortably be described as supportive (for example, he told the Financial Times[paywalled] the business should not be split prior to Ofcom having made its formal recommendation).

So how come his views differ from many of his fellow MPs, with 121 cross-party MPs having felt strongly enough to sign a petition calling for its separation earlier this year?

"Firstly, I'd say no one writes a letter to their MP to tell them their broadband installation went really well. So a lot of MPs had inboxes full of complaints about their constituents' broadband. Although I did write to them regularly about broadband progress.

"In terms of how the communications work when broadband was delivered to particular areas, that wasn't done very well. There was quite understandably a focus on building the infrastructure, but not enough focus on saying to a small village 'you'll get it in six months time' – partly because things change and they didn't want to promise and find it didn't stack up. And thirdly, I think Openreach has a very poor record on service delivery. Customer service is bad. It's hopefully improving, but it is bad.

"And a lot of my MP colleagues had it happen to them. They suddenly didn't have any broadband and they were waiting three to four weeks for it to get fixed. So you can imagine it was driving them nuts."

Prior to Brexit, Vaizey was an ardent Remainer, arguing that an "in" vote would best serve the tech sector.

"We have already seen in the past couple of weeks how the commission is making a land grab for spectrum – a very technical issue, but very important. And also the way it is talking about regulating over-the-top providers. I am not saying either of those things are bad, but a highly respected voice in digital would be good.

"Having said that, we are where we are, and I do think there are other opportunities. We might adopt some EU laws anyway, and we can now push ahead with our own more tech-friendly regulations. So there will be opportunities – but I'm not going to go back on my view from before the referendum," he stated.

Vaizey was the longest-ever serving culture minister, and believes he has left his post in a good position for Hancock.

"I think over the last five years the sectors that I looked after have become more important to the UK. Both for the economy and in terms of our image. I won't claim all the credit for it, but I would like to think having a minster there for six years consistently banging the drum has made a bit of a difference."

He points to the video games industry as an example. "I always say: 10 years ago the only questions that were asked in Parliament were 'did it cause this person to kill someone?'. And now I think people recognise the role it plays in our economy."

Does he play games? "Yes, I play FIFA with my son and games on my phone." Like Candy Crush? "No, I don't play that."

But he is clearly proud of his time in government. "Look at the DCMS, it's a tiny department. And three years ago, Labour was saying the government is going to abolish it. Well now it's got a new digital economy unit, run by a highly respected ex-ambassador to Israel Matthew Gould. You've got Joanna Shields doing counter-extremism in tech, and all the work around cyber security.

"What I would ultimately like to see is a digital economy department that is ultimately responsible for pushing the digital agenda."

That department would look after digital infrastructure, digital economy, support for the tech sectors, digital government, cyber security – rather than having that brief split across the Cabinet Office and DCMS, he says.

But under the Theresa May regime, it's hard to imagine that happening any time soon. ®