Tesla has launched a new power pack that it claims will make its Model S sedan the third fastest road car ever produced.

The electric car company announced the release of a new 100kWh battery that it claims will accelerate its highest-end Model S car from 0-60 in just 2.5 seconds and 0-100 in 2.7 seconds.

That puts it just behind Porsche's 918 Spyder at 2.2 seconds and Ferrari's LaFerrari at 2.4 seconds. But, as Tesla pointed out in a blog post, both those cars cost over one million dollars and the new Model S P100D will set you back a mere $120,000 (why not get two?).

Getting away from pure speed, Tesla also says that its new highest-end model will now go 315 miles without the need for recharging, making it the longest-range electric vehicle by some distance.

The same new, larger battery can also be added to Tesla's Model X SUV, giving it an equally face-bending 0-60mph time of 2.9 seconds – a time that only companies like Ferrari, McLaren and Porsche can put claim to. The SUV, which can carry up to seven people, will go up to 289 miles on a single charge, the company claims.

On a closed press call (Tesla is not a big fan of criticism), Elon Musk was his usual exuberant self, noting that "the fastest accelerating production car in the world is an electric car" and that should send "a great message to the public about the future of transportation." 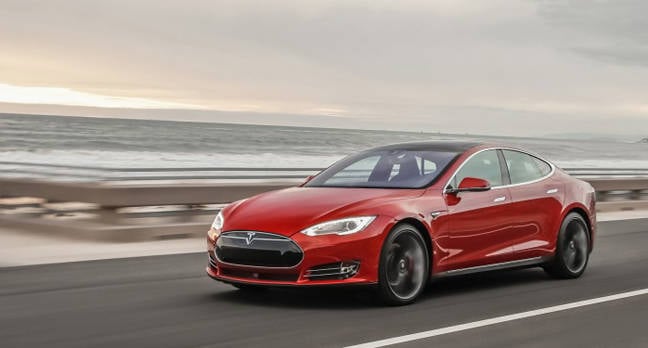 The company also avoided the habit of supercar manufacturers to rub their crotches on their extremely fast vehicles, and emphasized not only that the car was very, very expensive but that its bigger goal was a cheaper, mainstream Model 3.

Musk also noted that although tweaks and improvements in battery technology had enabled the latest super-powerful battery, "we are quite close to theoretical limit." ®