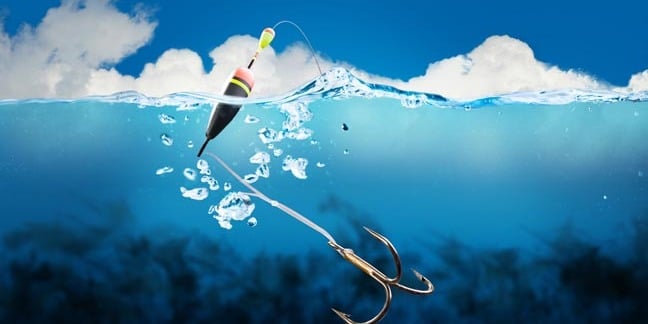 A plucky German nudist out for a swim at a local lake was left in agony after an angler hooked his worm.

Herbert Fendt - an alias the embarrassed man adopted to spare his family's blushes - was taking a dip in the Kaisersee, near Augsburg in south-eastern Germany, when the tackle-on-tackle action occurred.

Initially the man thought he’d caught his todger on some weeds in the lake - a popular spot for fisherman and nudists - but soon discovered the cause of the pain.

“I cried out to the fisherman ashore shouting ‘do not pull, do not pull’. I was terrified he was going to try to reel me in,” Fendt told the local press.

Back at the lakeside, Fendt was unable to remove the hook – but he cut the fishing line and cycled home before he drove to the hospital where a slightly amused doc was on hand to help.

Fendt, who wasn’t allowed to shower or swim for a fortnight, said the fisherman wasn’t sympathetic to his plight. “He told me it is not an official bathing lake”.

“I tried to explain to him that he should take into account the swimmers who use the lake, and that I am unaware of any official prohibition to swim here but he did not care.”

Undeterred by the penile peril at the bathing spot, Fendt said he was planning in future to swim in the middle of the lake, “just to be safe”.

The lake is owned by a local fishing association and its president, Sylvia Fischer - no, really - was reported as saying that anglers should be mindful of bathers but that people swim “at their own risk”. ®