All together now: I like big butts but I cannot fly, you boffins can't deny...

Video The Airlander 10 hybrid – part airplane and part airship – has had a bumpy touchdown after piling into its landing site nose first.

The 92-meter (302-foot) aircraft gets 60 per cent of its lift from the helium that fills its two massive airbags, which have earned the aircraft its nickname of the Flying Bum, although the manufacturers call it the Martha Gwyn. The remaining lift comes from its small wings and aerodynamic shape, powered by four turbocharged diesel engines. 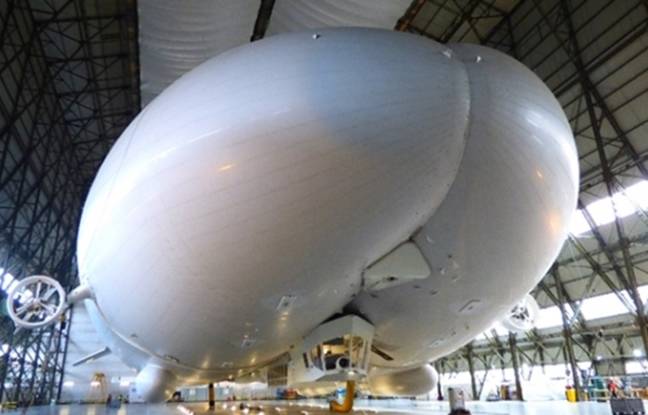 It was developed at a cost of $100m for the US military, was sold back to its makers Hybrid Air Vehicles (HAV) for just $300,000, and the company has now begun test flights to establish airworthiness. Based on Tuesday's crash near the UK's Cardington Airfield, there's a fair amount of work still to be done.

"The prototype Airlander 10 undertook its second test flight and flew for 100 minutes, completing all the planned tasks before returning to Cardington to land," HAV said in a statement.

"The Airlander experienced a heavy landing and the front of the flight deck has sustained some damage, which is currently being assessed. Both pilots and the ground crew are safe and well and the aircraft is secured and stable at its normal mooring location."

Airships are subject to stalling and nosing towards earth, in a similar way to ordinary aircraft, although the company didn't say if this was the case in Tuesday's crash landing. The UK's Air Accidents Investigation Branch has said it is investigating the incident.

Although the Airlander was originally developed as a surveillance platform, HAV has plans to turn the design into the ultimate cargo carrier. The aircraft can carry 10,000kg (22,050lbs) of passengers and equipment for five days without landing and can drop its contents to land without the need for a dedicated airport.

HAV hopes to build ten of the craft, and then move on to the Airlander 50, a larger version capable of carrying six times as much cargo. The firm aims to have these behemoths flying by the 2020s, providing low-cost delivery to remote areas of the globe. ®