Bloody Dell! Is EMC going to drop its logo? Answers on a postcard to Brentford

Pics Corrective brand surgery seems to be taking place at EMC’s London HQ already – it may be that Michael Dell is so keen to get his hands on the storage giant that he can’t wait for the ink to dry on the deal.

Following a tip-off about the changes taking place, El Reg in the UK braved the mean streets of Richmond and Kew to reach the premises in Brentford, Middlesex, nestled glamorously under the shadow of the M4 flyover.

We can report the EMC logo once emblazoned on the huge clock tower next to its main office was covered in a black plastic sheet with workmen on a crane, er, doing stuff to it.

Dell has always publicly stated the $63bn buy of EMC will conclude between May and October. 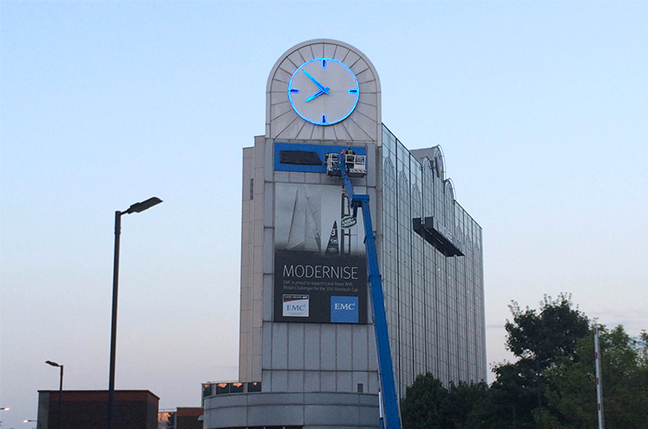 Here's what the building looked like previously (screen grab).

Our sources told us previously they had been informed by management at EMC to expect completion on either early August or early September, depending on when Chinese regulatory authorities approved things.

Reports a week ago in the New York Post suggested this has happened already, but sources at Dell told us there has been no such confirmation internally.

Channel sources told us to expect confirmation of the buy at some point next week, though Dell is keeping mum.

“The Dell EMC transaction is on schedule under the original timetable and the original terms,” a PR rep at the Texan PC baron told us.

We asked EMC UK PR man Simon Skinner for comment on the strategic placement of the black sheet, but he’s yet to return our calls.

Updated EMC has told us Mr Skinner is on his hols but nevertheless he has asked the US corporate team for comment. We'll update the article again if it arrives. ®