Go forth Spitzer! To infinity and....

Telescope to enter new "Beyond" phase

NASA’s trusty Spitzer Space Telescope is set to enter the next stage of its mission which has been dubbed “Beyond” in October.

The 0.85-metre device is the largest infrared telescope in space and covers an important wavelength range - 3 and 180 microns - not observable from the ground. Launched in 2003, the telescope has outlived NASA's expectations.

“"Spitzer is operating well beyond the limits that were set for it at the beginning of the mission," said Michael Werner, the project scientist for Spitzer at NASA's Jet Propulsion Laboratory. "We never envisioned operating 13 years after launch, and scientists are making discoveries in areas of science we never imagined exploring with the spacecraft."

The Beyond mission will continue studying a range of astronomical objects in the solar system and further afield. The infrared 'scope can peer through regions normally hidden from optical telescopes.

Spitzer has been useful for spotting young stars sprouting beneath shrouds of gas and dust, detecting exoplanets using the transit and microlensing methods, and finding light signals from the most distant galaxies.

The farthest and oldest galaxy, GN-z11, was found by the Hubble Space Telescope and Spitzer in 2016. The bright young galaxy is about 13.4 billion light years away, meaning the light we see now was emitted just 400 million years after the Big Bang.

Keeping Spitzer going in its old age will be a challenge for engineers, however. The telescope trails Earth in its journey around the sun, and over time the distance between the two has widened due to the telescope’s slow speed.

To resume communications with Earth at farther distances, Spitzer's antenna must point at higher angles toward the sun, exposing itself to higher dosages of radiation and heat. Not only will this increase the likelihood of damage to the heat-sensitive telescope, it also places its batteries under more stress.

The solar panels will be pointing away from the sun and so will have to operate on less power. The mission team will have to disable some of the autonomous safety systems in place to continue operations.

The Spitzer telescope is the final instrument to complete NASA's quartet of telescopes known as NASA's Great Observatories. The other three telescopes are the Hubble Space Telescope, the Compton Gamma Ray Observatory and the Chandra X-ray Observatory.® 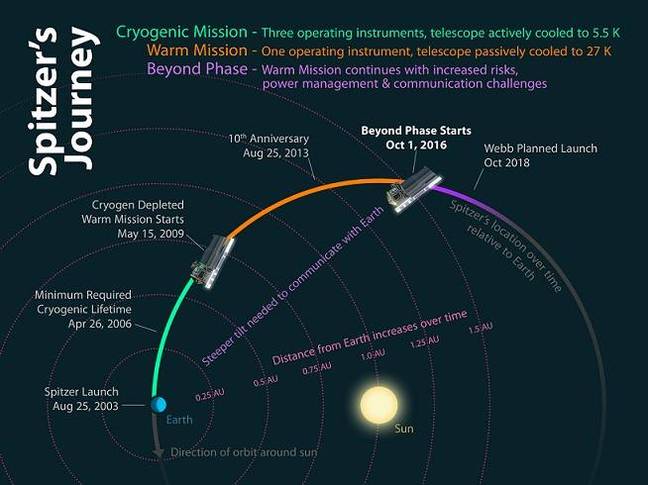 Different stages for the telescope begin at a certain distance away from Earth. ®